Swamp creatures from The Frog Prince, performed by the Missoula Children's Theatre in the Harrington multipurpose room both Friday and Saturday drew good sized crowds.

A robust exchange of ideas occurred at the recent Harrington Public Development Authority meeting, Tuesday from 7 to 9 p.m. at city hall with president Heather Slack leading the discussions with Nathan Luck, Tim Tipton, Bunny Haugan, Marge Womach and Jay Kane. The group discussed the grain bin plan for the vacant lot project, stating that there are two available that need to be measured to determine which one the Chamber prefers. Once one is selected, they need to determine the best way to transport it. Then it must be evaluated. After the value is put on it, since it is being donated, Chamber can turn in papers for the matching funds with Innovia in accordance with the grant that was awarded for the project.

The group then addressed the issues small communities have in keeping their town in focus as a place to move to for school, work or enterprise. Some issues seem to remain at a standstill. A large portion of the business district is composed of buildings that are essentially prevented from being used as a local business, since they are presently being used as places of storage. People who own these buildings have the rights of property owners to utilize their property as they see fit; however, it creates a major obstacle for the town in terms of available space for businesses to come to. A recommendation was made that perhaps the city council should create a new ordinance regarding empty buildings in the business district. Similarly, the availability of housing in Harrington is limited. Discussion was held regarding the houses in foreclosure, the houses that are not currently livable and the limited potential for building new structures. Slack asked for an "empty house list" to be created. Some discussion was held regarding potential developers showing an interest in Harrington. Another area of conversation was that Harrington needs to speak more of moving forward, sharing the types of businesses we would like to see come to Harrington and the reasons why Harrington is a great place for that business.

It was announced that the Draper building, formerly known as the Challenger Cafe, is now actively on the "for sale" list. Also, the Cruizin' Harrington sign will be repaired as soon as the snow melts away from its base. During Cruizin' Harrington the PTA is going to continue keeping their sale at the school. The Authority will hold its elections in May. The next meeting is April 16.

Lindsay Riddle filled multiple roles, including Jones, Maria Von Fly Trap, Queen and director, while Serenity Jones was tour actor and director. They did a marvelous job with our local talent. The moral to the story was positive: "Our hero becomes a Prince (formerly known as Frog) and realizes that friendships are made, not bought-and he discovers that it is not what you are but who you are that counts." 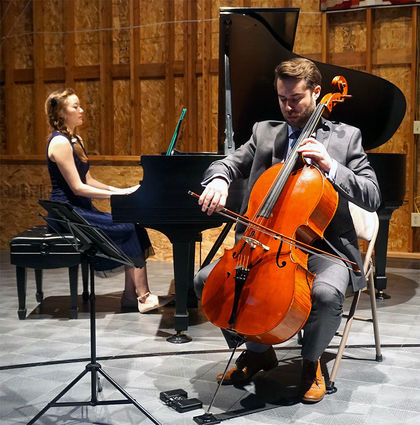 Brady Anderson on Cello and Jasmine Nagano on piano, play the Cello & Piano concert at the Meilke barn March 24.

Saturdays are special days in Harrington, and this past Saturday the Harrington Opera House Society joined with the Food Bank at the Nazarene Church and God's Closet at the Community Church to open an outreach program called "A bit more." If members of our community and surrounding area are in need of food and clothing, it was thought that they may also be in need of basic everyday household items. With that in mind, The Society was open to give items that are needed as well as to accept a small donation if items were wanted but not needed. Items available for this gifting will be those items left from previous sales; all new donations will be designated for the Cruizin' Harrington Rummage Fundraiser. This was a trial Saturday and there was sufficient interest to deem it worthwhile. More than a dozen persons stopped to check out the wares and chat during the 10-2 p.m. period that the doors were open.