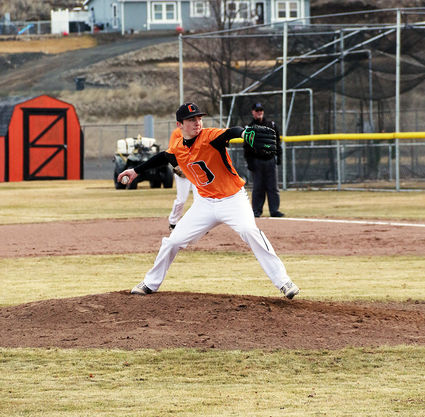 Jett Nelson pitches to Northport in the second game of Monday's home double-header at Finney Field, as the Tigers shut out the Mustangs.

The OHS Tigers attacked the Northport Mustangs with all of their might on Monday, March 25, winning 15 to 0 and setting the tone for what will hopefully be another winning Tiger season.

In the first game of the double-header, the Tigers had 27 plate appearances, 17 at bats, 15 runs, 7 hits and 11 runs batted in. From the batter's box, Marcus King and Bradly Singer each belted out a triple.

In game two, the Tigers overwhelmed the Mustangs, shutting them out by an even bigger score, 20-0.

The boys scored their 20 runs on nine hits and as a team had 12 RBIs. King hit two doubles, but the Mustangs contributed to their own demise by walking 11 batters. The Tiger base runners then contributed by stealing five bases. 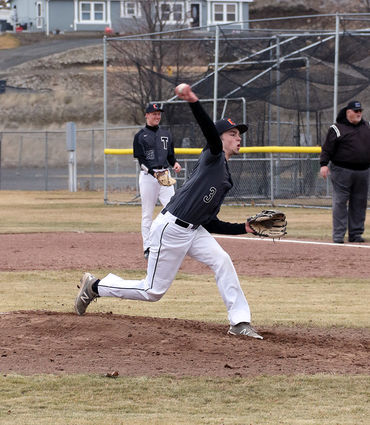 Camden Weber pitches to a Northport batter in the first game of Monday's double-header played in Odessa as the season gets under way.

I expect nothing less than the best from this Tiger team as I have witnessed throughout the rest of the sporting seasons. With their hard work, drive and a ton of teamwork, they will knock this season out of the park .

Come out and enjoy a game with your team on Thursday, March 28, at 4 p.m. at Finney Field in Odessa. The game will be a non-league contest against Lind-Ritzville/Sprague and will not be a double-header. Cheer them on to another victory.