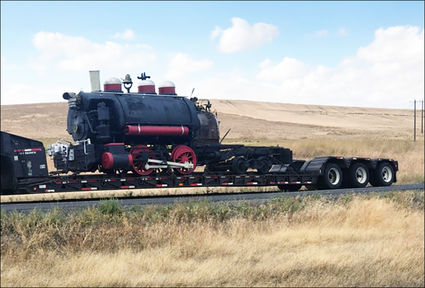 Donated by Whitman County to the Inland Northwest Rail Museum at Reardan is a 0-4-4T Davenport locomotive, built in 1920.

The Inland Northwest Rail Museum opens its third season at its Reardan location on Friday, April 5. From opening day on, the museum will be open from 10 a.m. to 5 p.m. Fridays, Saturdays and Sundays until the season ends on December 15.

Over the winter months, volunteers have rearranged and categorized many of the museum artifacts and memorabilia by railroad so visitors can better learn the history of railroads in the Inland Northwest.

Several rail cars in the museum collection are undergoing restoration. The group has finished restoration inside its Northern Pacific dining car and has recently completed painting the outside of the car in its original color. The Spokane, Portland & Seattle Railroad's "Mt. St. Helens Buffet Lounge Car" is about half complete, with volunteers now replacing all the windows. This will be one of the cars used in a future "Ag Tour Train."

The museum building encompasses two floors of exhibits. Thanks to a capital grant from the state of Washington, construction is now underway to add an elevator to the building. The new elevator will make it easier for visitors to access second floor exhibits and for museum staff to move displays up and down.

New to the museum

The Inland Northwest Rail Museum at Reardan was the recent recipient of a 0-4-4T Davenport Locomotive donated by the Whitman County (Washington) Historical Society. Built in 1920, it is a standard gauge, coal-fired engine built as number 1768. The society purchased the former Northern Pacific Depot in Pullman, Wash. and decided that the engine did not fit in with its plans for restoration of the depot as a museum. Thus, it was offered to the Reardan museum.

The Reardan museum was responsible for moving the locomotive to its own site. First, a makeshift cab had to be removed by museum volunteers to prevent wind damage during transport. Arrangements were then made by the group to have a crane company load the locomotive on a flatbed truck. Coincidently, it was the same company that had moved it to Pullman originally. The accompanying photos illustrate the removal from the site in Pullman by raising it in a sling onto a truck, strapping it down for the 90-mile ride, and unloading it at Reardan.

The Inland Northwest Rail Museum will have it on display for all visitors to see and will reconstruct an accurate cab and tender. Future plans are to examine the boiler to determine the feasibility and costs of restoration to fire it up again. During your visit to the museum you may check out the engine.

In addition to opening day, special events are scheduled for every month. First up will be May 11 designated as "Railroad Day." This special day marks the 150th anniversary of driving the golden spike at Promontory, Utah to celebrate completion of the first transcontinental railroad in the U.S. Special displays will detail the event, and everyone will get a chance to drive a golden spike! You may pick up an event schedule at the museum, check the website at http://www.inlandnwrailmuseum.com or give the group a call at (509) 796-3377. The museum is located at 27300 Sprinkle Road North, two miles west of Reardan on State Highway 2.