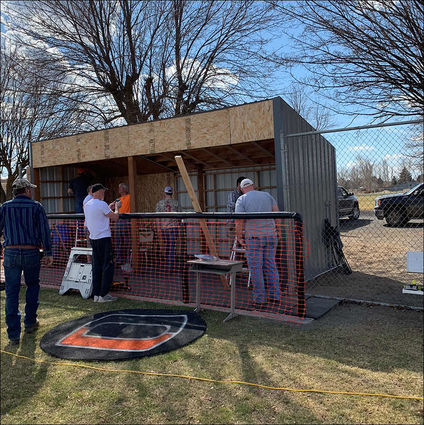 The Odessa Lion's Club help to finish the assembly of one of two new dugouts at Finney Field.

Other than the box score above, no statistics were entered for this game.

On Saturday, March 30, the Tigers defeated Cusick in both games of a double-header at home in Odessa with identical scores of 11-0.

In game one, Jett Nelson and Marcus King led the attack at the plate. Nelson's three hits included a double and scored three runs while bringing in four RBIs. King also had three hits, including a triple, that scored two runs and two RBIs. Tiger base runners contributed six stolen bases.

Theron Schlomer was the starting pitcher and went four innings. He gave up two hits, walked one batter and struck out nine. Nelson pitched the final inning, striking out the final three Cusick batters.

Tim DeWulf was the starting pitcher in game two. He faced 16 batters in four innings, gave up one run, walked two and struck out seven. Camden Weber came on in relief and closed out the game after walking one batter and striking out three.

Marcus King is not only a threat at bat. While serving as catcher, he was responsible for put-outs of the most opposing players, 12 in the first game and 10 in the second, making him deserving of the Athlete of the Week award this week.