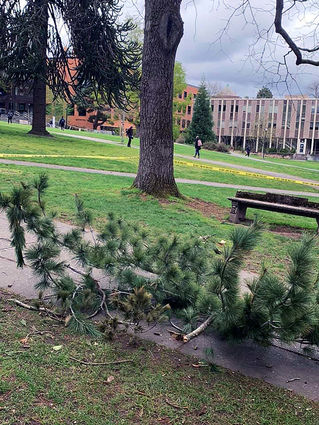 A tree branch fell while Odessa students were on a tour of the UW campus in Seattle.

The Odessa High School FBLA chapter traveled to the state business leadership conference held in Bellevue last week, April 10-13. Despite being ambushed by a wayward pine branch as the Odessa group was touring the University of Washington campus, the students handled their presentations during the conference with skill and confidence.

The following teams won awards and the ability to attend the National Leadership Conference in San Antonio, Texas from June 24 to June 27 this summer.

Fourth place for the Publication Design team of Maddy Wagner and Tori Weishaar. 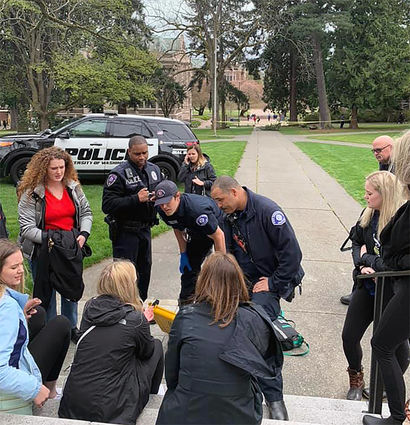 University police and EMTs tend to the many minor bumps and bruises experienced by the teens and their chaperones. No serious injuries resulted, and the students went on to compete well at the state conference.

First place for the Broadcast Journalism team of Brady Walter and Maddie Scrupps.

The Odessa FBLA chapter was also rewarded by being named the Outstanding Chapter of the Year!

Their advisor Terri King was assisted at the conference by several students' mothers. "Their knowledge of FBLA, business and technology, and their ability to keep 35 teenagers properly dressed, fed, organized and happy allows our chapter to be outstanding," King said. "Just when it seemed the sky was falling, they handled every crisis with grace and wisdom."