Blown away (literally) by Spring Fling 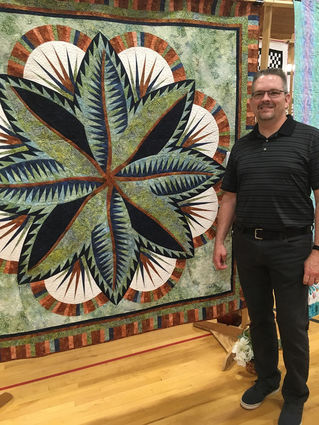 Mayor pro tem Kelly Watkins, in the absence of Odessa Mayor Bill Crossley, selected his favorite quilt for the Mayor's Award at the Spring Fling quilt show this past Saturday. --Photo courtesy of Laura Estes.

Spring Fling 2019 was just about blown away by the weather. An attempt by Odessa Chamber of Commerce members to experiment with locating vendors in the parking areas along First Avenue was stymied by wind gusts of up to 40 mph, blowing dust and even a brief period of hail. About a dozen vendors were set up early Saturday morning. When the winds began in earnest at about 10 a.m., at least one vendor's shelter was blown down, resulting in a hasty gathering of merchandise and packing up to head home. The wind continued its onslaught, and by noon almost all of the vendors had called it a day and left.

The weather also kept the crowds indoors, so the quilt show in the school gym drew its usual fans and the Old Town Hall Rejuvenation Society's indoor yard sale also attracted many patrons.

Again this year, the Odessa all Car and Bike Show sponsored by Rolling Thunder Pizza and other local businesses was a success despite the weather. "We had a pretty good showing of cars and trucks, and a few brave bikers also made it," said Nate Lathrop of Rolling Thunder Pizza. This year a new truck class was added and Lathrop was thrilled with the old and interesting trucks that participated. He plans to continue having a truck class again next year.

Lathrop provided this account of activities in the lot across the street from his pizza shop which is also owned by him:

"With a new stage and an addition of local Odessa talent leading up to the main band, downtown Odessa was rocking all day. The music started, along with the wind, with a hearty performance by Odessa's own Richard and Steven Molsbee performing as the Highlanders and a set by Christina Leffler of great covers and original songs of her own. Even with the cold wind, dust and snow both kids and adults were dancing.

A beautiful invocation by Pastor Michael Sgobba from House of Hope Ministry was well attended, followed by singing of the Star Spangled Banner by Shannel McDowell, with U.S. Army veteran Richard Molsbee presenting the flag.

The same band as last year, the "Armed and Dangerous Band" played on the new temporary stage. A few vendors were moved inside out of the wind in the garage area where our antique Franklin cars are stored. We had a few great volunteers that came to help, and it was much appreciated. Winners' names and information will follow. We are already working toward a successful 2020 Car and Bike Show. Save 25 April on your calendars. It's a go. Rain, wind or shine."

The show had 10 cars entered, plus six trucks and three motorcycles. Winning entries will be announced next week.