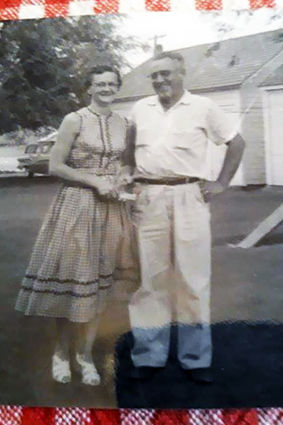 Ladies aid entertains husbands: The Ladies Aid of the English Congregational church entertained their husbands at the church parlors Wednesday night. Over fifty people were present and a most enjoyable evening was spent in games, contests and social chats. One of the contests was guessing the names of about twenty-five Odessa people from photos taken in early life. In this Mesdames W. L. Michaelson and J. C. Evans tied for first place, each only having failed to give correct names for three pictures. A quilt block contest for men followed in which E. L. Cherry was awarded first prize for neatest sewing. "Doc" Bresee and a number of his friends still insist that he had Cherry beaten to a frazzle in this contest but lost out from the fact that he had his block sewed so tightly to his trousers that the inspection committee disqualified his work. "Ollie" Butterfield won both consolation prizes but had as good a time as anyone there. Refreshments were served before the party disbanded.

Old lady has serious accident: Mrs. Elizabeth Zier was the victim of a serious accident Tuesday when she fell down the basement steps of her home in south Odessa, breaking the bones of both forearms in the fall. Dr. H. Mitchell was called and reduced the fractures, but on account of her age which is between sixty and seventy years, thought it best that she should have hospital attention during the six weeks or more that it will require for the bones to knit. She was therefore taken to a Spokane hospital Wednesday morning. Mrs. Zier is one of the oldest settlers of the Odessa country and has many friends who hope for a speed and entire recovery.

Odessa Hi wins tournament: The Odessa Hi tennis team made a clean sweep in its match with Ephrata high school racquet wielders won the local courts Saturday. The best Grant county team got an early start and came via auto arriving here in time to start on schedule time which was shortly after ten o'clock. Only two of the matches were closely contested. They were the boys and girls doubles in which it was necessary to play three sets before a decision could be rendered. The scores of all the games follow:

Alumni invitations bring responses: Cards mailed to alumni members informing them of the annual meeting and dance to be held on May 20 are bringing responses, it is announced by Mrs. Leon Walter, secretary.

The members of the graduating class of the Odessa high school will be guests at the meeting.

A pot-luck dinner will be held at 6:30 and the possibility of forming a parent-teacher association will be discussed. Alumni members with children are most urgently requested to attend.

Need for Air Wacs is urgent now: "The need for enlistments in the Air Wacs is urgent, stated Lt. Jean Marie Louttit, in a talk before the commercial club on Wednesday. Trained men are carrying double loads because of shortage of manpower, and women can release others to assist.

"At least five percent of the available members of the community are needed, she continued, and it is proven that a Wac can do the work of two men, because, in addition to the work assigned her, she will find other tasks to do, while the men are directing their attention to the day when they can enter more arduous duties.

"The women enlisting now will be given a five week's basic training and will then be assigned to their jobs.

"She called upon the men of the community to be enthusiastic in support of enlistments."

At the club business session Edmund Weber of Seattle was introduced, and representatives of the agricultural committee announced that 4-H beef would again be sold at auction, and that there was a possible chance that ration stamps would not be required.

Sewer project given green light by council: The proposed sewer collection and disposal system for Odessa, which has hung int he balance for a period of several weeks, received the green light Monday night. Members of the town council vote unanimously to proceed with the project.

The project, as proposed, is to be financed by monthly service charges to customers and by tax assessment thru a Local Improvement District. A 30-day "protest" period ended May 1 at 5 p.m. on the LID. If, during that period of time, valid protests filed with the city clerk met or exceeded 60 percent of the total amount being proposed for assessment, the project would automatically have been killed.

It was reported at the council meeting Monday that protests had reached a maximum of 53.9 percent, an insufficient amount to kill the project. Although numbers of residents technically do not apply in this situation, it was also determined that less than a majority of the property owners (about 45 percent) had protested the project.

Inasmuch as it was not possible for a representative of the Engineering firm, which had prepared the preliminary plans, to be present, a time schedule for continuation of the project has not been determined. Many weeks will obviously be involved in the preparation of final plans, calling for contract bids, sale of bonds, etc. before the actual construction can get underway.

It was pointed out at the council meeting that no tax assessments for the project are expected for many months. Property owners will have an opportunity to pay the assessment without interest after completion of the project which should be accomplished in 1970. Those who desire to spread their assessment payments out for as much as 10 years allowed under the LID law, will presumably have until 1971 for the first payment.

A letter was read by the Mayor which stated that at this time there are no new FHA grant funds available. With the tightening of purse strings by the Nixon Administration, it was indicated that none would be forthcoming for an indefinite period.

Several visitors were present at the meeting, all speaking in favor of getting the sewer project underway in Odessa. Dr. Kenneth Gudgel, local health officer, indicated in a statement to the council that he felt it was necessary that the project be carried out; that the Public Health and Pollution Control officials would soon step in and require action.

Other proponents and members of the Odessa Chamber of Commerce speaking for the project included Bud Thompson, Chuck Carnes and Lyle Raugust.

Included in the show will be paintings by members of the local club and ceramics from a local ceramics group. All types of crafts and hobbies will be exhibited. Anyone who wishes to show his or her items may bring them to the Edwards store building Thursday, May 22, between 1 and 5 p.m. or contact Phillis Latimer or Daisy Hardung for further information.

Demonstrations will be held each day. They will include glazed painting by Dorie Looney, ceramics by Lydia Gettman and oil painting by Agnes Kramer. The "Kid's Korner" will show artwork from the children of the Palette's members.

The firm was discharged from its duties by the Town of Odessa after presenting cost estimates which were $25,000 more than the estimate made by Kimball Engineers, which the council has hired to direct the overall closure plan for the landfill.

CH2M Hill, which had been the second low bidder for the project, was hired to replace Emcon.

The town has established a set-aside fund collected from residents through increased solid waste collection fees. The fund is based on estimated total costs for the closure of $350,000. According to terms of the state grant the town expects to receive. If closure costs exceed $500,000, the town is liable for 100 percent of the overrun.

Seventy-five years ago this week, the first talk of a community hall for Odessa was heard (see This Week in Odessa History, Page 3). It stirred the town to action, and within a year and a half, largely through the efforts of a fund-raising campaign by the Odessa Commercial Club, forerunner to the Odessa Chamber of Commerce, a $30,000, two-story civic center rose.

The inaugural event was a dance in the main ballroom and auditorium which occupied most of the first floor. It was not well-attended because a blizzard was raging that night.

When it opened, observers from other towns said it equaled municipal buildings in communities 10 times Odessa's size. It was impressive. Its early art deco architecture lent distinction to downtown Odessa. The auditorium had a stage and a ticket office. Under the stage was a basement garage, which housed the town's Model T fire truck. It was also the location of Odessa's only jail cell.

Upstairs, was a large lodge room, which also served as the town council chamber, a dining room, kitchen and another large room off the first landing as one climbed interminable stairs to the second floor. This room was used as the police court and later as the Odessa Public Library.

The second floor was abandoned in the early 1970s when most civic functions moved to the new Odessa Community Center two blocks up First Avenue. The building faced condemnation when the Odessa Grange, the Masonic Lodge, the Tri-County Fair Board, the Royal Neighbors, the Chamber and many individual Odessa citizens joined to save the building. They restored it at a cost of $35,000.

However, they stopped short of remodeling the second floor, partly because the fire escape was not up to code. The upstairs rooms were shut off and forgotten.

Downstairs became a focal point of activity, and it continues to be so. The big auditorium has been partitioned into a dining room and a meeting room. Odessa seniors gather there for lunch several days a week. The Grange, the Odessa Lions Club and other civic and fraternal organizations hold their meetings there. The Old Town Hall serves a purpose the Community Center can't. It is just the right size for smaller groups.

Last week, Mayor Denny McDaniel led a group on a tour through the second floor of the Old Town Hall, which the Town of Odessa owns. There have been discussions recently about restoring the space to provide homes for the Chamber and the Odessa Economic Development Committee, which are both looking for office space.

The discussions have led to suggestions that both the Chamber and the Town of Odessa, perhaps with the cooperation of various civic groups, could undertake the remodeling project.

The group McDaniel escorted last week found the old building still intact but vulnerable to time and the elements. The roof over the former library leaks. This already has caused some damage to the floor.

In an adjacent room, plaster has fallen from the ceiling, no doubt due to the contraction and expansion of the wooden laths underneath during temperature changes. The upstairs rooms have not been heated since they were closed.

The lodge room was still resplendent, with its sculpted tin ceiling and tiled floor. The roof over that section of the building doesn't leak, but years of accumulation of cobwebs and dust and shabby draperies handing limply suggest that disuse has taken its toll.

The upstairs rooms could be rehabilitated incrementally and made available for the Chamber's and the Odessa EDC's use, those on the inspection trip agreed. There would be some major expenses, including the rewiring and a new fire escape. The kitchen is hopeless, and would require total replacement. The floors need refinishing. Otherwise, a paint job and a few other cosmetic improvements could again make the Old Town Hall's second floor come alive.

The restoration is a worthy project, which is receiving increasing attention.