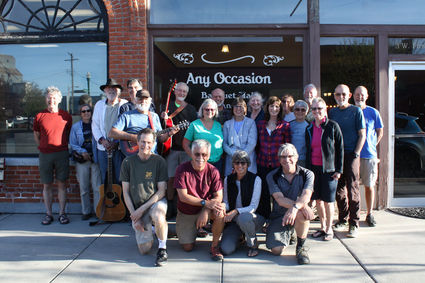 The Merry Hikesters of Olympia spent several days in Odessa last week, hiking on trails in the Channeled Scablands in the company of a retired geologist and also visiting the Odessa Museum to learn more about the history and ethnic heritage of the earliest settlers in the Odessa region.

The Merry Hikesters are approximately 20 members of a hiking club out of Olympia who spent several days in Odessa last week. These retired educators and government workers had gotten to know a retired geologist named Pat Pringle who was willing to accompany them on their hikes in eastern Washington's channeled scablands. He explained to them how the scablands came to be carved out of the landscape during the cataclysmic floods that swept through the area as the last Ice Age was coming to an end between 18,000 and 13,000 years ago.

The group visited the Odessa Craters, located only a few miles north of town along SR 21, the Pacific Lake and Lakeview Ranch Recreation Areas and the Twin Lakes area. Many of the hikers were also interested in bird-watching and exploring the existing flora along the trails they were hiking.

After each day's hikes, the group would gather in Odessa at Any Occasion Banquet Hall for an evening meal catered by Chiefs Bar & Grill and by Odessa Golf & RV and beer provided by Rocky Coulee Brewing Company. The Odessa Drive-In was also a popular spot for lighter meals, in-between snacks or treats of ice cream cones and milk shakes.

The evening meals were also the times when several of the hikers would bring out their guitars or other instruments for a general sing-along session.

The group arrived Tuesday, May 7. While several of them checked into the motel, others who drove to Odessa in RVs headed to the golf course's overnight camping area. That same afternoon they met up with Paul Scheller, a member of the Odessa Historical Society, who opened the museum for them to visit and provided them with some of the historical background of the town. As a tourist destination, Odessa has plenty to offer, at least for a group like the Merry Hikesters who appreciate the interesting landscape and the flora and fauna that live in it and on it. 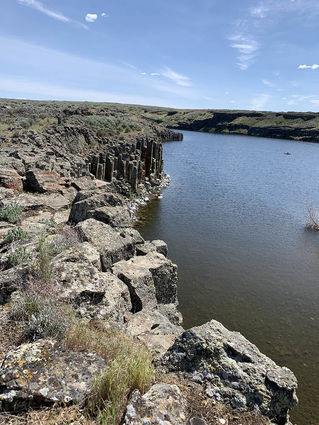 Basalt and water makes for a striking view.

We at The Odessa Record were very fortunate to be the beneficiaries of the group's largesse. In addition to sharing their evening meal on Tuesday, we were also urged to take a share of the leftovers being distributed to whomever might want them. We managed to eat very well last week.

The group found Odessa to be filled with friendly people who welcomed visitors and made them feel welcome and accepted.