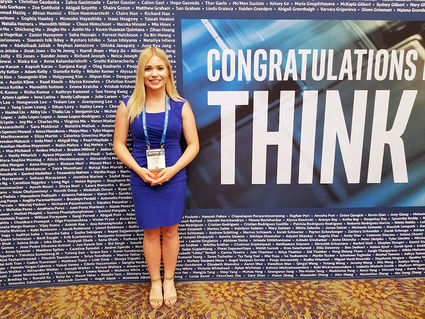 Odessa High School science student and Advanced STEM Researcher Josie Westmoreland began her research journey in 2017 when she was thinking about environmental issues regarding stem cells and observing their nature via zebra fish. Her ideas continued to evolve until she thought about how much brake dust comes off of a car's brake pads with every stomp. Josie continues to investigate the effect of excessive brake pad particulates accumulating in the Seattle environment. In a typical day, more than 600 kg are released into the Puget Sound area of Washington state; this is caused by a multitude of vehicles collectively braking tens of thousands of times an hour, releasing minute amounts of brake dust into the environment.

Brake pad dust has been shown to cause multiple health issues such as developmental toxicity, organ damage, neurotoxicity and various forms of cancer. Drosophila melanogaster (fruit flies) were exposed to a calculated amount of brake pad particulates which should impede vitality and development. In initial trials, flies were exposed to the calculated 0.0195 grams of brake dust. The flies were expected to be monitored for multiple generations, however after 48 hours there was 100% mortality with no new larva. The brake pad dust amount was then decreased by one hundred percent, to 0.195 milligrams of brake dust. The flies were monitored again with an average of 16 flies deceased per day. After one week, there was 100% mortality with no new larva. No mortality was found in the controlled group and new larva was produced. The flies from the experimental groups were collected and sorted into ten separate vials and washed with a soap solution on a shaker table for one hour. The flies were then sectioned and mixed with 10 ml of distilled water with the contents tested using ICP-OES (inductively coupled plasma - optical emission spectrometry).

After an intense week of practicing, presenting and collaborating with scientists from across the world, Josie returned from Phoenix and the Intel International Science and Engineering Fair. With nearly 2,000 students from over 80 different countries attending and 19 finalists from Washington state alone, the competition this year was extremely demanding. Although Josie and 13 other students from Washington state did not make it to the award stage, her grit and determination has her already preparing for next year.

Josie plans to engineer a small container that can be fitted onto the brake caliper, so that the dust coming off the brake pads will enter the container. By her calculations, the container should fill roughly every 6-9 months, and a certified mechanic could dispose of the dust while performing a regular oil change. Josie also hopes to collect data from the soil and water of larger cities to determine if there is a correlation between her calculated level of brake dust and the actual amount found in the soil or waterways.

"I am so honored to have been selected by the state of Washington to present my research at the International Science and Engineering Fair," says Josie, "and I have to say I am missing the warm Phoenix weather! I dealt with some pretty difficult judges, but I also received quite a large amount of helpful feedback. I am very excited to take the next steps in my project, and I hope to return again next year better than ever! Lastly, I'd like to thank the community for their support and encouragement towards me as I represented Odessa High School. Go Tigers!"

With the support of Odessa High School, the Odessa School District, the Odessa community, The Rural Alliance and the STEM Gems Grant, it has been an exciting time. If you would like up-to-date information regarding ASR Labs, you can follow their Twitter feed @ohsASR or visit their website: http://www.wehrdscience.com/ASR.