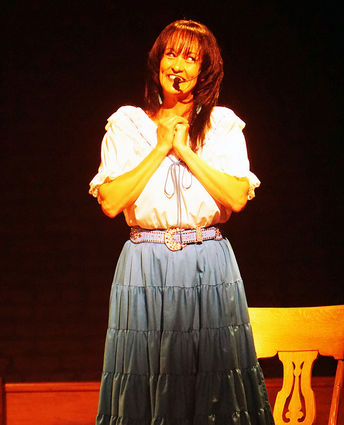 Elizabeth Steirle as Patsy Cline sang such favorites as Walking After Midnight, I'm Back in Baby's Arms and Sweet Dreams.

The 7 p.m. Bob Dylan and Patsy Cline Tribute at the Harrington Opera House began with Buck Stierle giving a few words about Patsy Cline beginning her career in 1956 and that Bob Dylan was booed off the stage in 1965. The music began before an audience of about 60. Elizabeth Stierle looked the part, in knee-high white boots, white blouse and a sea-blue flashy skirt. Singing "Come on In" (and Sit Down and Make Your Selves at Home) brought a nice round of applause. "Walking After Midnight" was well received as well. The music just kept coming: "Sweet Dreams", "San Antonia Rose", "Your Cheatin' Heart", "Hey, Good Lookin'," (which they dedicated to a local woman), "I Fall To Pieces" and "I'm Back in Baby's Arms". The audience seemed well pleased with the introduction to "Peter, Paul and Mommy" which was Elizabeth with their puppets (brothers, Peter and Paul). Peter was five years old, in spite of his answer to "How long have you been five years old?". Peter's response, "Fifteen years." They encouraged a sing-along to the Hank Williams song, "Good Bye Joe" (Jambalaya). This was followed by the Willie Nelson hit, "Crazy" (for Being So Lonely, Crazy for Feeling so Blue). "Blue Moon of Kentucky (Keep on Shining)" appealed to this audience as displayed by their applause. This dynamic duo packed a lot of music in before a brief intermission.

Buck, as Bob Dylan, brought the audience back to their seats when he began to play "Mr Tamborine Man" before the lights were flashed as a cue that intermission was ending. Two Dylan favorites enchanted the audience, "Blowing in the Wind" and "Times They Are a Changing". Buck explained before he strummed "If I Had a Hammer" that it was written by Pete Seeger and made famous by Peter, Paul and Mary. Buck took a few moments to introduce Harrington school's new music instructor, Robert Vierschilling. Song after memorable song was enjoyed including "I Was so Much Older Then Than Now", "Maggie's Farm" (I Ain't Gonna Work for Maggie's Papa No More, 1965), "Down in the Easy Chair", (written by Dylan, made famous by the Byrds), and "I Shall Be Released" (written 1967 by Dylan). When he played "That Lucky Old Sun" (just rolls around Heaven all day), Buck related that the lyrics were written by Haven Gillespie and music by Beasley Smith. This song was recorded by Dylan for his Frank Sinatra cover album, "Shadows in the Night" in 2015. One of Dylan's iconic songs, "Knockin' on Heaven's Door" was saved for the ending of his performance. It was written for the 1973 film entitled "Pat Garrett and Billy the Kid". For his finale "Like a Rolling Stone" brought the audience to a loud uproar demanding an encore, which he met graciously by adding a heartfelt rendition of (May you stay) "Forever Young" written by Bob Dylan in 1974.

Elizabeth Stierle is originally from Oklahoma and Buck is from California. Their home is at Castle Rock, Wash. They performed as Cowboy Buck and Elizabeth in the Harrington Opera House last October with the Harrington Grade School children. In just a couple of days, the children learned and sang the Panther Pride song, crafted by Buck (Paul) Stierle. From their website: "Elizabeth: From character voices to soulful blues she is comfortable with Looney Tunes and Patsy Cline. She is a delight to meet and converse with on any number of topics, but you'll soon find her greatest passion is, in her own words, 'there is no greater feeling than the one you get seeing the faces of your audience and then being able to visit with them after every show. I love letting each individual know they are uniquely special'." (www.buckandelizabeth.com)

"Note from the Principal: I am pleased to announce we have hired a music teacher for the 2019-2020 school year! Please welcome Robert Vierschilling to our community! Robert comes to us with many years of music experience, in particular, classic guitar.-Tiffany Clouse." From the Counselor's Corner with Ms. Ginny Lathem: "Hooray! Our music program, which took a brief hiatus, will be up and running for the 2019-2020 school year. We are so excited to bring music back to Harrington and look forward to hearing concerts and watching our students perform. Hopefully, along with 'traditional' music classes, we want to offer a guitar and/or ukulele class for our high school students but we can't do it without you. Musical instruments are like exercise equipment, often they are frequently used bringing satisfaction to the user. However, sometimes they are purchased with the best intentions, made use of for a period of time, then set aside earning dust. If you are one of theses folks, or if your Aunt Lucy never came to pick up her guitar, would you consider donating it to the school district? We are looking for gently used guitars/ukuleles which are playable and not in need of repair. If it needs strings, we can take care of that. If you are willing to donate an instrument to us, please bring it to the office. If you can't get to town, please let the office know and I will come and pick it up! Oh, and if, like BB King and Willie Nelson, your guitar has a name, don't worry, we won't change it! Thank you so much for being the village to help raise these wonderful students."

Baccalaureate service was Wednesday at the Harrington United Methodist Church and Graduation exercises were held at 6 p.m. at the Harrington school on May 31st. The Pre-K youngsters and older will be making farm tours on June 3 to the Larmer Farms and June 4 to Colbert Farms. June 6th from 8 to 8:30 a.m. will be "Donuts with Dad" (grandpa and Uncles, too) in the Elementary School. (This is the compliment to the highly successful "Muffins for Mom" that was held May 9. Harrington PTA is giving a Barn Dance/Potluck on June 6 from 5:30 to 8:30 p.m. at the Larmer Barn. June 7 is the last day of school, out officially at 10:30. Swim Lessons are on the school calendar for June 17th through the 20th. The PTA is sponsoring a free "Outdoor Movie Night" on June 28, at 8:30 p.m. (sunset), at the Harrington Elementary School lawn. The movie "The Lego Movie 2": The second part, will be shown. Pop, popcorn, water and candy will be available for purchase. 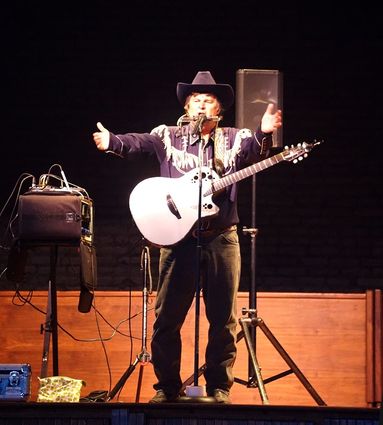 Buck Steirle as Bob Dylan played many favorites such as Mr. Tambourine Man, Blowing in the wind and Times they are a changin'.