Nine days with my family after nine years apart 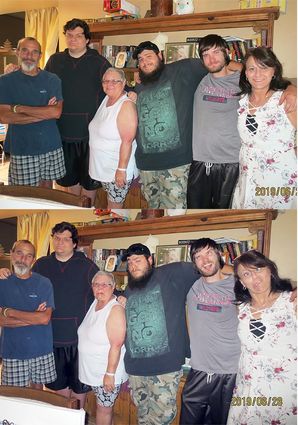 It's just after 4:30 p.m. on June 27, and I am sitting in the crowded Phoenix airport with my mom Edith and daughter Kaitlyn, waiting for our 5:25 p.m. flight to Seattle to start boarding. We will be among the first to board due to the fact that my mom requires a wheelchair to get from point a to point b when longer distances are involved.

There are both pros and cons to flying with someone who requires a wheelchair. The pros:

1. You get to withstand the dirty looks from fellow travelers because you get to bypass that really long line through the security gates and go ahead of everyone else.

2. You are allowed to board ahead of everyone else and stow your bags without that feeling of being rushed by the crowd.

1. You get to sit on a stuffy plane (usually in the middle seat, as in my case) and people-watch while everyone stows their items as fast as they can, climbing over each other to get to their seats and grabbing last-minute forgotten items out of their carry-ons, all while withstanding their dirty looks, because you got to board ahead of them.

Needless to say, we are tired, sad to be leaving and maybe a little bit grumpy. Unable to get three seats together, I am sitting in row 11 with my mom, while my daughter is in row 25. The way I figure it, by the time the plane lands, we get our bags that were stowed and make the 4.5-hour drive, I should be home sometime around 2 a.m. (if I am lucky).

We had just spent nine days in Tucson visiting my brother and his family. What possesses someone to visit Arizona in June, you ask? Well, it was the fact that I hadn't seen my family in nine years, that Kaitlyn hadn't seen them in 14 years and that my sister-in-law Cheree was diagnosed last October with stage-4 cholangiocarcinoma at the age of 46. It's a very rare type of cancer that starts in the small bile ducts that run between the liver, gall bladder and small intestine.

This woman is one of the strongest women I know. She has put up with my brother for roughly 25 years. When my dad was sick, she took care of him every day until he passed away, just so he wouldn't have to go into a nursing home. Her own step-dad passed away about 10 years ago and more recently her own mom. A few months before her diagnosis, my brother was hospitalized for a seizure he is lucky to have survived. So she is helping him with those health issues. A few months after her diagnosis, she lost her brother.

The cancer makes her throw up. She itches all the time. She has to watch out for jaundice, and she has no appetite. It has now traveled to her lymph nodes, and she's had lesions on her spine which seemed to temporarily paralyze her legs. Chemo has caused her to lose her hair, her appendix to flare up and eventually rupture, creating the need for emergency surgery.

The whole time we were in Tucson she was up-beat. She did overdo things the first few days, and it made her tire quite a bit. All in all, Cheree is doing amazingly well. She has had 10 rounds of chemo since all this began and is about to start her 11th round. We are hoping that after two to six more rounds she will be able to start a trial drug that, when she explained to me how her specific type of cancer works and how the new drug works, sounds very promising.

One thing about a spontaneous trip to Arizona in June is that there wasn't a whole lot of time or money to plan any outings. My brother Randy, niece Shelby and nephew Steven worked most of the time we were there. With only one car that is on its last legs, it would have been difficult to monopolize it for any length of time. My other nephew Seth, who stands 6'7", stays at home just in case Cheree needs him. She says that if she were to take a fall, he is only one big enough to pick her up.

Some of us did find the time to go up Mount Lemmon for an afternoon, My other nephew Steve (I have three) and his fiancée Jessica picked us up to go hiking and have a picnic. I myself opted for option B. Instead of a hike, I took a nap. I even had my first s'more, I had never eaten one before.

Tucson hasn't changed much other than the fact that it's gotten bigger Oddly enough, it still feels like home to me even after 30 years of being away. Luckily the weather stayed relatively mild for Arizona. The first truly hot day didn't occur until the day before we left for home. The day after we left, it was supposed to hit 107! 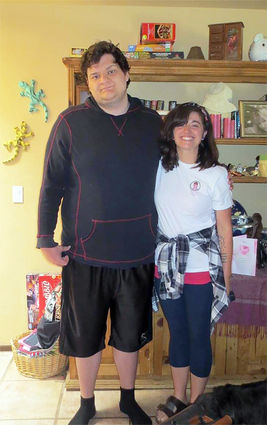 Kaitlyn stands next to her cousin Seth who is 6'7".

Other than the one outing we took, the rest of our time was spent lying about the house or out on the patio reading, drawing, painting, talking and generally lounging about. And that's okay, because we were content to do that and just be together. That is the beauty of my family. Whatever life decides to hand us, we make it work.