Legion riders feted to BBQ in the park 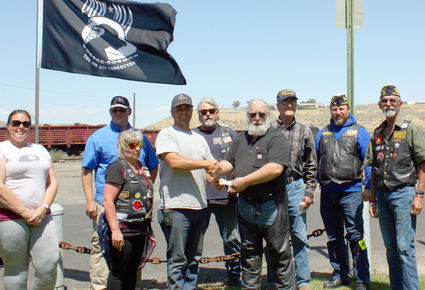 Following a barbecue at Reiman Park last week, members of American Legion Riders Post #28 of Ephrata thank Odessa veteran Ryan Scrupps for the local hospitality provided to them at the barbecue.

Members of the American Legion Riders Post #28 was in Odessa last week on their way to Spokane for a Legion convention.

The group was met just outside of Odessa by members of the local VFW and American Legion posts on their own motorcycles, as well as other non-motorcycle members from Odessa. The local veterans and various townspeople gathered at Reiman Park to treat the riders to a barbecue of bratwurst and buns and bottled water. The folks on bikes were very appreciative, and left for a quick stop in Ritzville on their way to Spokane. The Odessa veterans on motorcycles accompanied them as far as Ritzville. 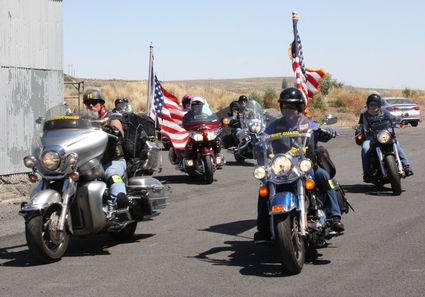 The members head out to a quick stop in Ritzville before going on to Spokane for a Legion convention last weekend.

They usually meet on the first Tuesday of every month at 6:30 p.m. at the American Legion post at 276 8th Ave. NW in Ephrata.

The group's director Pat Hanford also said the group was involved in fundraising for an organization that raises money for college scholarships for the children of American armed service personnel killed or severely wounded in action.