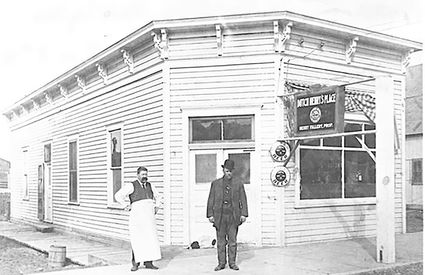 The photo did not identify the two gentlemen pictured, but the sign in it reads "Dutch Henry's Place, Henry Fallert, proprietor." One could assume the gentlemen are Henry Fallert and his bartender, left, George Woods. Could any of our readers confirm that?

"Ha, ha, ha, you and me, Little brown jug, don't I love thee." A local memorabilia collector brought a little brown jug into city hall last week which had the following words of advertisement on it, "Dutch Henry's Place. Harrington, Wash. Henry Fallert Proprietor." The tan/brown jug stood about 8 inches tall and its base was 6 inches in diameter.

Henry Fallert was born in Zell, Missouri in 1863 and came west as a young man of 24, working for others in various places in Lincoln County. In 1899, Fallert began settling down in Harrington where he was both a lodger and employ...