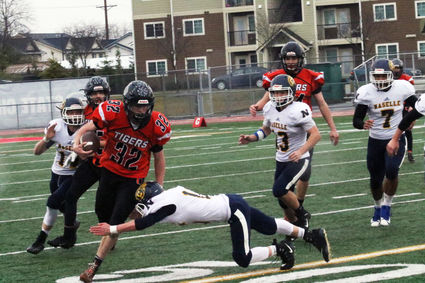 The Odessa Tigers defeated the Naselle Comets December 7 at Mt. Tahoma Stadium in Tacoma by a score of 80 to 26.

Odessa built its commanding lead in the first half (54-6 at half time), then eased up somewhat in the second half.

Odessa quarterback Camden Weber was back in action after missing a few games due to an injury. Jett Nelson, who had stepped up as QB while Weber was injured and capably led the Tigers through the playoffs was the starting QB and shared the spotlight with Weber in this championship game.

Josh Clark and Marcus King were the team'...