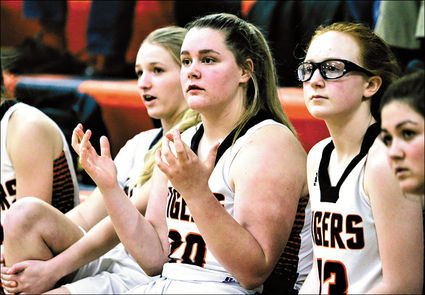 Tori Schlomer crosses her fingers, hoping the Tigers can maintain their one-point lead until the buzzer sounds in Friday's overtime period against ACH. The Tigers won. At left is Katreace Boss and at right are Hayden Schuh and Kaya Kuchenbuch.

Grace Nelson led the scoring with 11, while Kenadie Elder and Maddy Wagner each had 10 points and McKennah Davison had 9. Every member of the team scored at least one point.

The Odessa defense tallied 29 rebounds and 29 steals to seal this decisive victory.

On January 24, the Almira-Coulee-Hartline Warriors made their way to Tiger territory for an unbelievable match-up. The gam...