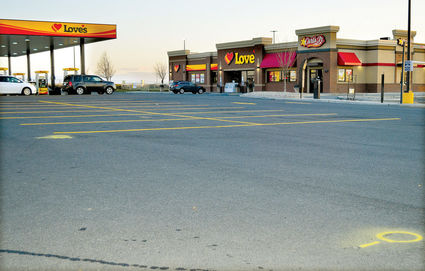 Paint marks an evidentiary spot of a person or item in the parking lot where motorist Shawn Lee was shot by Ritzville police officer Jeff Lane.

RITZVILLE - The Columbia Basin Investigative Team has identified the man shot and killed by police Saturday night as Shawn Lee.

Lee, 49, hometown not released, was shot in the parking lot of Love's Travel Stop and Country Stores, 1370 N. state Highway 261, by officer Jeff Lane, said a report on the shooting released this morning.

Lane is on paid administrative leave, standard operating procedure for an officer involved in a shooting.

According to the report, Lee was passing through Ritzville with a family member when his vehicle broke down and was towed back to Loves.