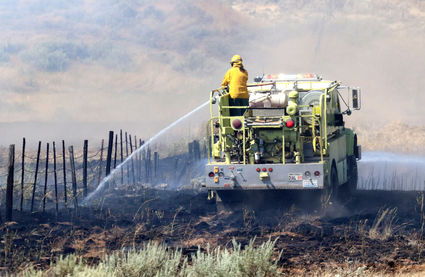 EDWALL – A fast-moving fire burned about 40 acres of wheat and sagebrush shortly before lunchtime Wednesday, Aug. 19.

The fire on Waukon Road, northwest of the Tyler Road intersection was contained by 12:10 p.m., the Lincoln County Sheriff's Office reported.

Fire crews from Edwall, Reardan and Sprague all responded to the blaze, as did Spokane Fire District No. 2 crews based in Cheney.

Farmers, too, jumped on the fire line, using their water trucks to help contain the blaze before it could jump the road.

The cause of the fire remained under investigation at press time. 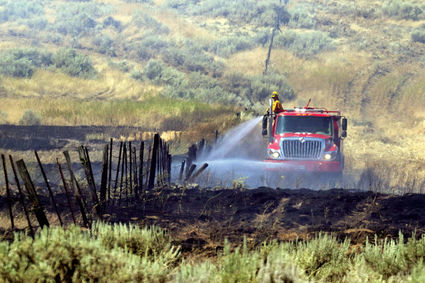 The fire was one of several burning Wednesday around the state following a weeklong heat wave that broke records in some Eastern Washington communities.

Nearby south of Cheney, the Badger Lake Fire is among the larger fires at 245 acres.

The largest fire in Eastern Washington is the Taylor Pond Fire burning on the Yakima Firing Range east of Yakima and south of Vantage.

Prior to press time, officials reported that fire had grown to more than 37,375 acres mostly in Yakima County and was moving toward the Columbia River.

Fire evacuation warnings had been issued for the Wanapum Tribal Village across the river in Grant County, just downstream from Priest Rapids Dam.