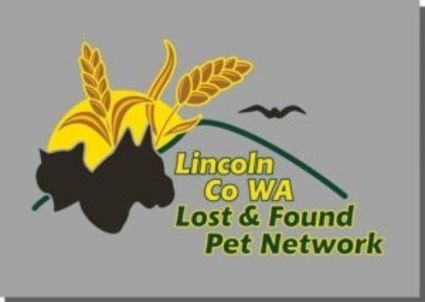 LINCOLN COUNTY – Dogs and cats and goats, oh my. The Lincoln County WA Lost and Found Pet Network has garnered reports of all kinds of pets missing or wandering the county in its six years of existence, and the nonprofit aims to reunite those animals with their owners.

The volunteer-run Pet Network was founded in 2014 by Jana Johansson. Board president Gina Habbestad and board member Barbara Grant run a Facebook page to network about lost and found animals, often posting pictures of missing pets or critters that the organization has found.

Habbestad often homes animals that have been discovered at her own residence until they have been adopted, returned to their owner or are eligible to go to a shelter in Spokane. She and her husband, Ed, run a separate animal rescue service and sanctuary, Norman’s World.

“Gina is the driving force and the primary volunteer,” Grant said. “She has got a heart the size of Texas.”

The shelter often deals with abandoned animals. Habbestad shared the example of Angus, a Labrador/pitbull mix who was found by the Sprague Lake boat launch and never claimed. The Network is currently trying to find Angus a home.

“I have him at my house; there’s no holding facility for dogs in the county,” Habbestad said. “Come fall, my main focus will be working with Angus so he can be socialized and then be adopted.”

She added that dealing with abandoned animals can be difficult to see.

“It’s interesting what people will do to an animal,” Habbestad said. “Some days are really tough. I look around my house and just lose it, because I have all these people’s castoffs.”

The nonprofit partners with the Lincoln County Sheriff’s Office (Sheriff Wade Magers is also on the board) to help locate pets that have been reported missing or found. The Network then returns them to their owner or attempts to re-home them if they’ve been abandoned.

“We’ve had hundreds of rescues, and they really do a good job of tracking down … lost dogs, dogs that need to be placed,” Sheriff Magers said. “It’s really an outstanding deal.”

Grant estimated that the Pet Network receives calls of loose animals, most commonly dogs, around three to four times a week. However, that number climbs as high as nine and as low as one per week depending on various circumstances. For example, a recent car accident in Reardan where a driver swerved to avoid a loose dog and rolled her car resulted in the driver’s three dogs also getting loose.

“Two of the dogs ended up in a neighbor’s yard, and the other dog was lost,” Grant said. “Gina coordinated the efforts to find the other dog, and she ended up keeping those dogs for a week until the (driver) could get out of the hospital.”

Grant added that a higher volume of pets go missing around July 4, as dogs often fear fireworks and run away.

While the Pet Network mostly deals with dogs and sometimes cats, there have been unusual instances featuring other animals.

“There was a pig (apparently) wandering around downtown Davenport we never found,” Grant said.

Habbestad shared that she received a call “around 9:30 at night” from a residence in Edwall, who reported a goat on their porch.

Habbestad asked her husband to go with her (“he was laughing so hard,” she said), and the two trucked over to the property, where they saw a small pygmy goat under a chair she could easily scoop up with her arms and take back to their residence until the owner was found.

“We were there less than five minutes,” Habbestad said. “They were not used to farm animals.”

As a nonprofit, the Pet Network relies on donations to fund food for found animals, any necessary veterinary care and other financial matters. The Pet Network legally must hold found animals for 30 days before rehoming, unless the owner comes forward. Donations have ranged as high as $5,000, and one young girl made art stickers and donated 10% of the proceeds to the Network.

“We would love to build our donor base,” Grant said.

No one on the board or who helps the Pet Network is paid, opting instead to put in hours as strictly volunteers.

“To me, it’s all about compassion,” Habbestad said.

Drew Lawson is a reporter and sports writer for Free Press Publishing, including the Cheney Free Press and Davenport Times. He is a graduate of Eastern Washington University.