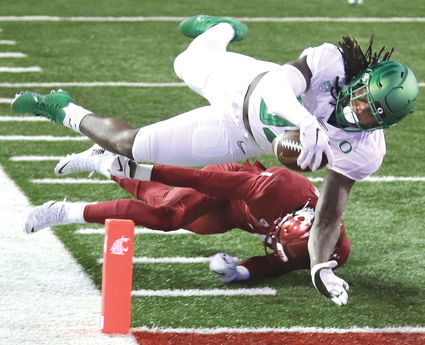 No. 11 Oregon topped Washington State University 43-29 in the Cougars' home opener in Martin Stadium in Pullman on Saturday, Nov. 14. The Ducks got on the board first when Oregon tight end D.J. Johnson dove across the goal line, just inside the marker, as WSU defensive back Tyrese Ross tried to prevent the score.

PULLMAN - The Washington State University Cougars showed Saturday night that they can play with the best in the NCAA. But a strong first half wasn't enough to keep the No. 11 ranked Oregon Ducks from flying away.

On the other side of the ball, Oregon QB Tyler Shough c...