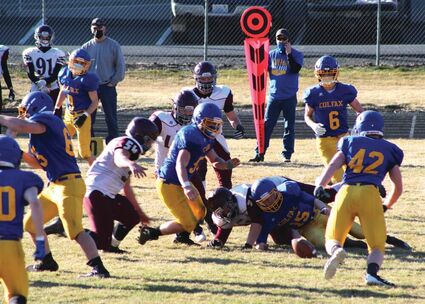 Reardan's Kobe Martinez dives after a fumble March 12 against Colfax.

COLFAX – Jacob Brown ran up the middle for another Colfax touchdown to put the score at 38-0.

"One touchdown before the half, guys," said a Reardan player afterward in the huddle at the sidelines.

It took until the third quarter, a bungled Colfax snap and an Indians recovery on the Bulldogs' 5-yard line, to put Reardan into scoring position. Quarterback Mahkai Anderson threw to Cody Sprecher for their only points and Reardan lost to Colfax 46-6 Friday, March 12.

"The sting's still there, let me tell you," Reardan head coach Erik Nikkola said. "But it's unfortunate that there's no playoffs...