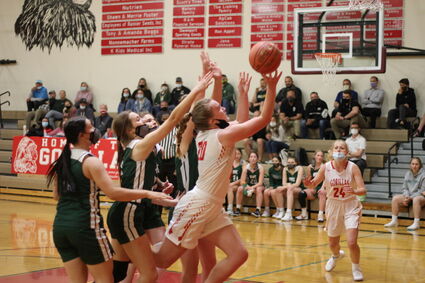 Davenport senior Ellie Telford turns to the hoop for two of her 29 points against Northwest Christian.

DAVENPORT-When the Lady Gorillas needed a bucket in their season opening game against Northwest Christian (Colbert), they just forced the ball inside to Ellie Telford. The senior delivered with a career-high 29 points while adding 10 rebounds and three blocks while Davenport knocked off NWC 52-40.

Telford was 11-for-19 from the field and 6-for-11 from the free throw line. Darby Soliday was the only other Davenport player in double figures with 13 points. Soliday added five steals, but turned the ball over six times.

"I feel like I'm pretty good at rebounding, so it's pretty easy for me to get a rebound and get a layup from there," Telford said. Four of her rebounds came on the offensive glass.

Telford was efficient from inside, but managed to crack a grin when she knocked down a three from the left corner in the third quarter after NWC head coach Geoff Tibbetts instructed his team to let her shoot from that spot, claiming she wouldn't take the shot.

"The coach was saying I couldn't shoot them, so I wanted to make one," Telford said.

The game was close throughout the first half, with Davenport leading 12-9 after one quarter but NWC recovering to take a 25-23 lead at halftime after scoring five points in the final 10 seconds of the second quarter.

The Lady Gorillas turned on the gas with a 22-6 third quarter, which was enough to overcome a sluggish fourth quarter that NWC won 9-7.

NWC stayed close through the three-point shot, knocking down six of their 19 long-distance attempts. Davenport struggled from deep, going just 2-for-11.

"We need to work on passing the ball and relying on one another," Telford said. "There's not really enough time to improve, so it's more about the connection."

Davenport was also inefficient from the free throw line, knocking down only 10 of its 24 charity stripe shots. The Lady Gorillas turned the ball over 22 times while forcing 19 NWC turnovers. NWC hurt its chances by going just 4-for-21 from two point range, a striking 19% clip.

Next up, the Lady Gorillas will head to Reardan to take on the Indians at 6 p.m. Friday, May 21.