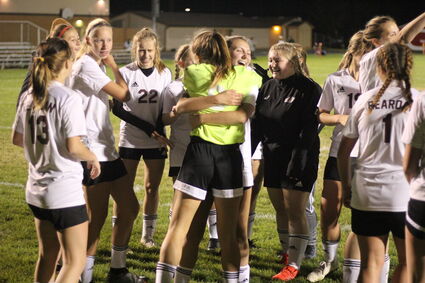 The Reardan soccer team surrounds sophomore goalkeeper Jaylee Abrahamson after Abrahamson makes the game-winning save during a shootout win for Reardan over Davenport Thursday, Oct. 7.

DAVENPORT-There were about five different times during Thursday's match between the Gorillas and Reardan that it seemed one team would take the lead with a go-ahead goal. That never materialized, as the rivals played to a scoreless draw in regulation and overtime. Then, some goalkeeping heroics for Reardan gave the visitors a 2-0 win in a shootout.

Reardan earned its first win over Davenport in program history. The two schools were meeting for the fourth time after Davenport won twice last year and in the first non-league meeting this year.