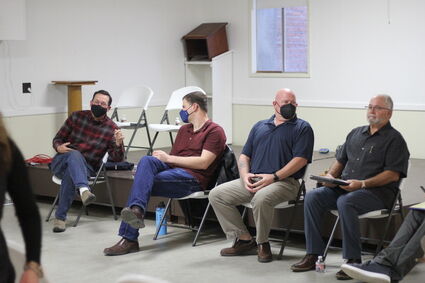 HARRINGTON-Candidates for city council, mayor, school board and the fire district gathered in Memorial Hall here to briefly speak to voters before mingling for a meet-and-greet. 10 candidates appearing on this year's general election ballot spoke to the crowd of about 15.

Pastor Cade Clarke, who is running for re-election to the school board, was first to speak and said he wants to see student growth within the district, particularly within the STEM and SPED programs.

He also wants to see the district become more competitive with athletic opportunities before emphasizing his main concern lies with academic growth.

Clarke's opponent, Justin Slack, also brought up athletics in his time to speak and said the district needs to work on why enrollment is declining.

"There's not enough kids here that want to play sports," Slack said. "We need to fix that."

Jon Evans, a Lincoln County Sheriff's Office deputy who is running unopposed for the school board, said he wants to see the school grow.

"If the school isn't here, then the town isn't here," Evans said. "It's really as simple as that."

Another unopposed candidate for school board, Roam Roasters owner Shelley Quigley, said she wants to make the school the best it can be for her son when he becomes school age.

"I'm hopeful to bring a different perspective to the board," Quigley said. "I'm excited to be a part of something where everyone has differing opinions but the same goal."

The speakers then transitioned to city government. Unopposed mayoral candidate Jess Silhan, who moved here in 2018, emphasized restoration of old buildings as one of his priorities.

"One common concern is to have the council stop making the utility tax rate go up," Armand said.

Armand's opponent, Denisa Holling, said she wants to make council a place where members work as a team, not for their individual agendas.

"I'm hopeful to get to a point where we're making people want to come here," Holling said.

Incumbent city council candidate Stephen Hardy said he wants to make sure the relationship between the new mayor and council is well-functioning. Hardy also talked about growth.

"We'll have to make investments to make sure there's a Harrington for the future," Hardy said. "I also want to make sure non-personnel documents are accessible on our website."

Hardy's opponent, Christopher Meats, wasn't in attendance at the gathering due to a family emergency.

Unopposed city council candidate David Buddrius, who is running for re-election, brought up infrastructure in a similar way to Silhan.

"We're trying to catch up from 40 years of dilapidation," Buddrius said. "I also want to make sure we're not raising our water rates just to raise them."

The last candidate to speak was Ron Mielke, who is running unopposed for his fourth term as a Fire District No. 6 commissioner. Mielke said he wants to keep the district's ambulance running and work on the recruitment of new volunteers.

All candidates are on the ballot for the Nov. 3 general election. Ballots must be postmarked by 8 p.m. that day for the vote to count.