By Marjorie Womach
Special to The Record 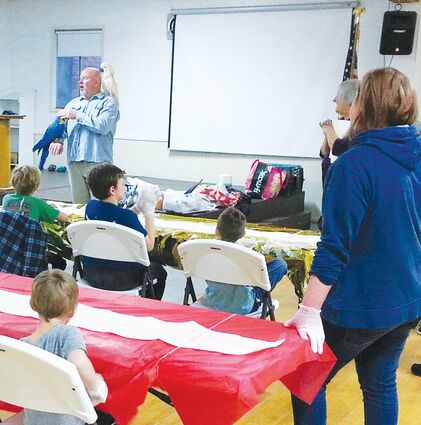 Joe Armand educates children attending the Harrington Public Library's after-school program about two of his pet birds, Jamie, a Macaw, and Peaches, a Cockatoo, both of which mimic human speech.

The session began with instruction pertaining to primary colors and the process of making secondary colors. The children seemed to enjoy the lesson and the discussion that followed. Evie Mann assisted Moritz, and several parents were present to help when needed.

Joe Armand brought two of his exotic birds to share with the students, Jamie, a five-year-old Macaw and Peaches, an approximately 55-year-old Cockatoo.

Armand shared details about the normal habitat of Jamie and Peaches in the wild, what they eat and their personalities. Jamie is very attractive with vivid colors of gold, blue and green. Peaches is described as having the color of peaches, hence the name. The students loved it when Peaches screeched and flipped her topknot, which is a darker tone than most of the rest of her body, which is white with a lighter peach tint. Peaches' antics, while perched on Armand's shoulder, caused much excitement among the children.

Hard to tell who was having the most fun. Armand said he has been retraining Jamie due to acquired vocabulary from his former family's home. "His language was a little naughty," he said.

The students asked many questions and were very interested, hanging on Armand's every response. One student asked Armand if he takes the birds for a walk. He told them the story of his first walk on Harrington's streets with the birds on his shoulders.

A large owl flew right over the top of him, very, very close. With all the wild predatory birds native to the area, he realized it was a danger to his birds to be exposed. He says he feels it is much safer if he doesn't walk the birds outside.

The students all received white t-shirts to be taken home at the end of session. They were shown how to use rubber bands to tie the shirts in different ways to make "unknown" designs.

They selected their favorite colors from the 16 different colors provided to apply to the damp t-shirts. When finished, the rubber bands were not removed and the t-shirts were placed in a plastic bag. The instructions given to the students were: "Wait 6 to 8 hours before opening the bags, then rinse the shirts before drying."

This after-school program concluded with cookies and Kool-aid before parents picked them up.