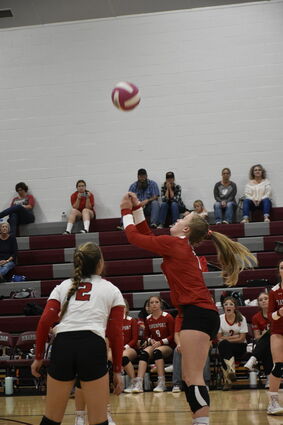 Davenport eighth-grader Emalie Jacoby goes for a set against Reardan Tuesday, Oct. 11. The Gorillas held off the Screaming Eagles in five sets.

Davenport took a 10-2 lead in the first set before Reardan gained momentum behind Emma Flaa's two aces, and Liberty Anderson's kill, which tied the game at 11. Reardan maintained a comfortable lead after that.

In the second and third sets, Davenport played disciplined defense. Thanks to Tatum Hupp and Selah Hupp, the ball rarely hit the floor. On offense,...