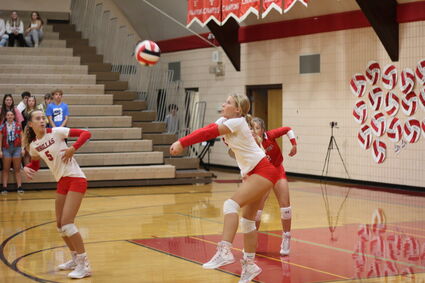 Davenport freshman Chloe Hammond secures a dig against Asotin Thursday, Oct. 6. The Gorillas came back to beat the Panthers in four sets.

DAVENPORT—For a set, it appeared the volleyball squad might suffer a disappointing loss to the visiting Asotin Panthers. But a dominant second set propelled the Gorillas to win three straight games en route to a 3-1 victory Thursday, Oct. 6.

The Panthers pulled away in the first set after a competitive first 20 combined points to win 25-14. Davenport completely flipped the script in the second set, however, thoroughly dominating in a 25-7 victory.

The third set was the match’s most competitive. Back and forth went both teams into a 25-25 tie, but Selah Hupp’s kill gave Davenport the...