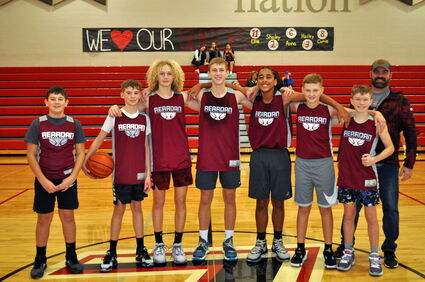 REARDAN–A basketball team comprised of seventh and eighth-grade boys qualified for the Washington Middle School Basketball Championships by winning five games and the championship at the Veterans Day Tournament in Spangle on Nov. 11-13.

The team is not school sponsored, but the players attend Reardan Middle School. They compete in the Spokane YMCA league and play in various tournaments throughout the year.

Players will join the school's team in December.

Coach Jared Flaa has coached this group of boys since they were in the third grade.

"We want to have fun, learn basketball fundamentals...