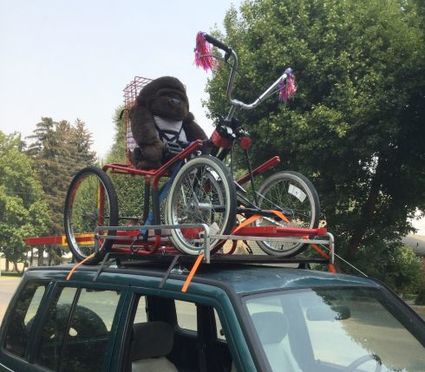 An adult trike, a disassembled rickshaw and a gorilla named Hobbes were headed for an adventure.

Saturday, August 25, a Harrington resident and her sister departed Harrington in a well-laden automobile with gear, supplies and camping equipment strapped to the top, and a sign on the rear reading "The Kettles Go to Burning Man." The preparation for the trip was long, having made reservations in January and great planning into what costumes might be well-received. To aid in mobility in the desert, a rickshaw was built by the women, utilizing a lawn chair, bicycle axle and wheels, old pant stretchers, fabric for the colorful canopy, and oak poles. The rickshaw was also planned for a means of giving rides to strangers and a means of initiating conversations. They also took an adult trike. Bicycles were provided in limited numbers at the event, as once a person arrived at their campsite, no vehicles were allowed to drive until the end of the session. All water and food for the eight days was taken in the car.

Burning Man is an annual gathering in the desert (a private event held on public land), about 100 miles north of Reno, in a re-created city called Black Rock City, in the Black Rock Desert, Nevada. The event lasts for eight days culminating on Labor Day weekend. At the end of each year's event, not a trace is left behind of the massive community that had occurred. Everything needed at Burning Man is carried in and must also be carried out. This to some might sound fanatical, but even gray water is not to be dumped on the playa, shower water has to be evaporated off or collected and carried home. The area is meticulously raked to ensure no traces of the gathering have been left behind. This process takes volunteers about three or more days following the event.

The principles behind camping at Burning Man are listed as: radical inclusion, gifting, decommodification, radical self-reliance, radical self-expression, communal effort, civic responsibility, leaving no trace, participation, immediacy. These are all defined on the website https://en.wikipedia.org/wiki/Burning_Man.

The gals left Harrington at 11:30 and arrived at the site north of Reno at 2:30 a.m. Then followed a six hour delay due to most of the 70,000 participants all arriving on the same day. The city is mapped out as a semi-circle with various "camps" for different interests. They chose to locate in Hushville, where there were no generators and no amplified music. As they began setting up camp, which consisted of two individual sleeping tents and one living room tent, a dust storm began and filled their tents with dust before the event even started.

The general atmosphere as described by these two sounded like a modified Garden of Eden where people are encouraged to give of themselves, treat others as they would want to be treated, and engage others in conversation. Nudity was allowed, but not common. There were no vendors for food, as each person was responsible for taking their own supplies for the week. Ice and coffee were the only items available for sale in the city. The sand was hard and easy to ride a bike on. There were areas where RVs and motor homes were camping. The concept of inclusion permeated the Burning Man event. New arrivals are greeted with "Welcome home!"

The Burning Man gatherings have been held since 1986. This year's theme was "I, Robot." Great talent brought in works of art and with 70,000 people, there were unimaginable projects on display. There was a 747 that had been hauled out for the event with no wings and no tail, and tours of the plane occurred throughout the week. People brought their emotional baggage to the plane and the crew at the 747 promised to lose the luggage. A small sampling of the displays included an Octagon Pod House, a House on Chicken Legs and some 18-foot diameter teepees. There was a human brain created from glass fishing floats, a Golden Gate Bridge, a sail boat and a more than 40-ft. tall bear. Activities went on day and night. During the evenings and into the night, pyrotechnics and fire-dancers were seen. Music on the perimeter of the semi-circle was louder than that in the median area, and there were dance areas. Every type of music imaginable, including bluegrass could be enjoyed throughout the week. Lectures occurred in various locations and the travelers from Harrington enjoyed one on International Space Law, given by a young man and woman, both having PhDs.

Burning Man is really all about burning the man and what he represents. There is also a full-sized wooden temple built every year and burned to the ground on the last day. People are encouraged to bring items to leave at the temple which is located out past the man and burned as the finale of the event. The "burn" of the man is real and accompanied by an amazing display of fireworks but takes place on a burn platform to prevent burn scars leaving a trace. The construct is that guests leave items to be burned with Burning Man, letting go of everything as it burns. "New" permeates those who attend, new images in their minds, new experiences of sharing and new vocabulary which includes "MOOP" (materials out of place); "playa" (desert floor) and "LNT" (leave no trace). Burning Man left an imprint on these gals who returned to their homes in agreement that this experience is one they will never forget. They have wasted no time and have already begun to make plans to attend next year and include a third sister who was unable to attend this year. If you care to join them, the official website is: https://burningman.org/

Margie Hall, Lincoln County Economic Development Council director, was seen at the Post & Office one day this past week where she was excitedly relating that John Flanagan, policy advisor on Transportation & Economic Development, Office of the Governor, is arranging to come to Harrington Friday, October 12, at 1 p.m. to discuss and receive feedback on broadband policies currently being developed in Olympia. This will allow our citizens to share the story of Harrington's fiber network throughout the downtown district. This October event will be at the Post & Office, the place to meet, greet, educate and relate.

Saturday, October 13, from 9 a.m. to 6 p.m. will be "Sip & Shop," otherwise referred to as "Junkin' at the Larmer Barn" with a reasonable admission cost of $5 per person, with kids aged 12 and under attending free. The Larmer barn is a historic farm building turned event center, located on a working wheat farm at 5298 Harrington-Tokio Rd, in the Harrington district. Vendors' wares will consist of homemade goods, repurposed furniture, antiques, jewelry and the rustic, to name a few. Coffee will be available from The Post & Office and the event is well advertised locally as well as on social media: https://www.facebook.com/larmerbarn/ 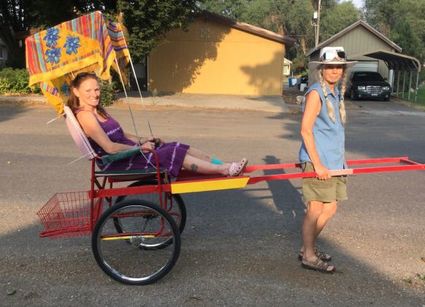 A newly constructed rickshaw before it went to the Burning Man event near Reno, Nev.

"Odessa News. Martin Gilman, formerly of Ritzville, is erecting a building which he expects to use as a meat market.

Dick Finney of Wilson Creek found a steer the other day in the Palouse country, belonging to himself and brother George, which had been missing nine years. He concluded he had lived long enough and sold him at once for beef.

A. Bok has returned from Spokane to resume work on his ranch.

The sheriff of Yakima was in Odessa recently, in quest of a man who had borrowed a span of horses and a yellow wagon with a black tongue. He failed to find man, horses or black-tongued wagon.

Mosquitoes are beginning to make themselves conspicuous by their old-time familiarity." (Front page, Citizen: 3-23-1900)