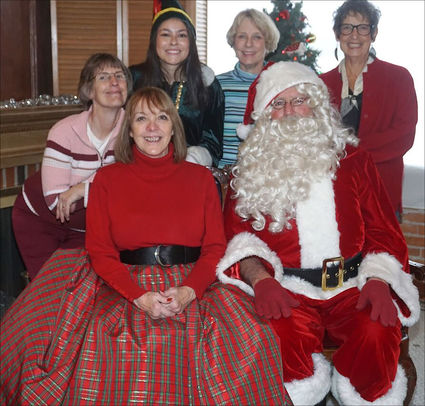 The Harrington City Council met November 29 at 5:30 p.m. for a public budget meeting with Mayor Justin Slack, councilmen Nathan Luck, Mike Cronrath, Peter Davenport, Levi Schenk and Tim Tipton, clerk Bunny Haugan and two visitors, Marge Womach and Cherie MacClellan present. The mayor opened the "Hearing for Final Budget" and the long process of adjusting calculations began. Considering how recently Slack has moved from council member into the role of mayor, he showed great ease in understanding and explaining the process and procedure and a great willingness to bring the other council members into a similar understanding. One issue that changed from the previous meeting were the figures for the purchase of a new lawn mower. This brought a repeat of the situation before the council regarding continuing to maintain the cemetery and park lawns or having it contracted out. Discussion was held on the utility rate, a rate proposal, and the need for a letter to the citizens with explanations. A minor change in theory for hiring a part-time clerk from the proposed 30 hours to only 20 hours per week modifies the budget figures considerably. The council reviewed the need for digitizing maps of sewer and water lines, and that the eventual records that would be produced could save the city in avoiding errors in location of lines as well as the impact that would result in the city's insurance liability.

Harrington and vicinity were given the opportunity to hear two performances at the Fairplay Concert Hall on the Ron and Linda Mielke farm, highlighting Alicia Mielke on the flute, accompanied by Kevin Garnica. The concert was recorded by Spokane Public Radio, KPBX 91.1 for broadcast at a future date. A nice crowd of around 40 were in attendance at each of these performances, Friday at 7 p.m. and Saturday at 2 p.m. in a hall with a capacity of 80. The family states that the Fairplay Concert Hall came into being when it was realized that the second floor of the barn turned out to have great acoustics, as well as being the perfect size for a half court of basketball, which the Mielke girls thoroughly enjoyed in years gone by. They eventually designed a system to move a piano to the second floor in order to have a high quality instrument for the distinguished pianists that come to collaborate.

Alicia Mielke was born and raised on the Mielke farm located in the historic Harrington Wheat Belt. After 11 years in the Harrington schools, she attended Interlochen Arts Academy in Michigan for her final year. She received her Bachelor of Music degree, summa cum laude, from the University of Texas at Austin with Marianne Gedigian in 2011 and her Master of Music from the New England Conservatory, studying with Paula Robison, in 2013. She was the recipient of the 2012 Boston Woodwind Society Flute Merit Award and placed third at the Pappoutsakis Memorial Flute Competition in 2013. She has given multiple recitals in their Fairplay Concert Hall with donations taken to benefit the Harrington Food Bank and Spokane Public Radio. She is currently farming with her parents in Harrington, an unusual occupation for a flutist.

Kevin Garnica, pianist and composer, is an active musician in the Los Angeles area. He received his Bachelor's degree in piano performance and his Master's in music composition from California State University, Fullerton, where he studied with Eduardo Delgado and the late Dr. Lloyd Rogers. As an undergraduate he was awarded top prize in his class, and his chamber cantata based on the story of Joan of Arc, Jehanne the Maiden, was awarded Outstanding Graduate Composition. In 1995, Garnica became one of the youngest winners of the ASCAP Composition Competition when his piano piece, Sonata for Scriabin, was chosen from over 500 entries. He was also awarded the John Williams Grant for composition. His song "O Magnet-South," was a finalist in the Art Song Composition Competition of the National Association of Teachers of Singing. As a soloist and chamber musician, he has performed in Central and South America, Europe and throughout the U.S. Garnica received his Doctor of Musical Arts from the University of Texas, Austin, with a full assistantship, under the tutelage of Anne Epperson. He is currently the staff pianist, vocal coach and music librarian at California Polytechnic University, Pomona.

The Mielke and Garnica performance began with "Sonata" by Francis Poulenc, written in 1957, considered to be a prominent feature in 20th century flute repertoire. "Jeux" by Jacques Ibert delighted the audience as they performed this animated and dynamic piece. Following Jeux, they played "Sonatine for Flute and Piano" by Pierre Sancan, a French composer. Their performance of "Sonata" by Otar Taktakishvili was well received by the audience. Their final number was "Fantasie Brillante on themes from Bizet's Carmen" by Francois Borne. The much appreciated encore selection was "La fleur que tu m'avais jetee" by Georges Bizet.

For readers who wish to attend Mielke's next flute concert, the opportunity is around the corner as she will be playing at the same venue on January 25 and 26, 2019, with Jonie Qiuning Huang at the piano. Those wanting to follow this local talent's schedule may sign up to receive information at barnconcert@gmail.com

The arrival of Santa on Saturday, December 1, at the Harrington Opera House brought cheers and excitement from the little ones (and adults) waiting to visit with Santa. Santa, Mrs. Claus and Santa's elf were busily occupied consistently until about 1 p.m. There were seatings of 29 separate groups or individuals, which incidentally included a grandmother getting her picture taken to send to her grandchildren who she'll not be able to see this holiday season and three teenagers who needed "proof" of their belief in Santa's ability to meet their wishes. Quite a few children brought their lengthy lists of wishes, while others had them memorized. Several tours of the auditorium were given. Photographer Karen Robertson reported that the process this year went much more smoothly, with patrons using the Art Room entrance prior to their photo session with Santa in the lobby. The Opera House Society reports this to be the largest turnout for pictures with Santa on this 10th anniversary of visits with Santa at the Harrington Opera House.

Harrington's Holiday Bazaar was held in the Memorial Hall December 1 with plenty of vendors offering a variety of items for sale.

A good crowd turned out for the second annual Harrington Hometown Christmas Bazaar at the Memorial Hall from noon to 5 p.m. on Saturday. Not far from the door were cupcakes and others sweet items which had a good turnover. Children's crafts were offered from 1 to 2 p.m. The Tap & Jazz dance performance seemed to please the audience with a ballet and a hip hop dance. During a portion of the afternoon the piano students of Rebecca Hardy had their pre-recital practice performance to help prepare them for their December 15 recital. They did quite well. Mrs. Hardy played background music for more than an hour which seemed well received. Traffic at the soup bar fluctuated, but it was said that they did a good business. The FFA sold out of Poinsettias by mid-afternoon but continued to sell wreaths. Tables filled with gift items, soaps, and two jewelry vendors were available. Other items included quilts, embroidered kitchen accessories, hand-painted signs, fashion accessories and the opportunity to receive a chair massage. This short listing is just the beginning of the many choice selections available. One of the vendors stated that the day was very successful for her. The day's celebration ended with the Tree Lighting at the corner of Willis and Third at 5:15 p.m. followed by singing of holiday favorites by the Harrington Elementary students.