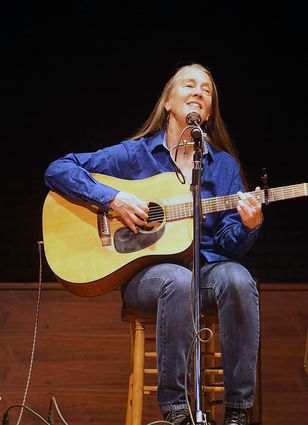 Last Saturday evening, , Karen Robertson introduced Carolyn Cruso to a small but responsive crowd in the Harrington Opera House at 7 p.m.. Cruso excitedly announced, “It is a treat to be here,” and began playing. After she had played the hammered dulcimer for a few songs, she educated the audience as she went. She gave a short background that the dulcimer was originally from ancient Persia which is now Iran, as well as from India. The background for the hammered dulcimer is the Appalachian Mountains.

Equally adept at the guitar (she used two), she played “Truck Stop Healer” and “If you were a natural disaster, what would you be?” a song she wrote, saying it was inspired by her friend, Flood. This song, needless to say, didn’t miss many disasters. It included forest fires, cyclones, landslides and volcanoes. Using her second guitar she played “Cross the Line.” Several other numbers on the hammered dulcimer were “Under the Cedars,” “Trinity” and “Old Joe Clark.”

Following a short intermission, she played a flute solo, followed by two additional songs on the dulcimer, demonstrating each of four sets of hammers and showing how each provides a different tone when struck in the same place. Most of her songs have stories to accompany, as a guitar song she played about a man playing a dulcimer on a Seattle city street in 1985. Prior to her final three jigs, she expressed appreciation to the Opera House Society and the audience for the opportunity to come to Harrington and play in our Opera House.

Harrington’s Third Street was a busy spot with Studio 1 on South Third Street having “Celebrate Spring” with three local artisans and across the street where the Post & Office was having “Happy Spring Pop-Up Shop.” This included four additional local vendors with handmade and repurposed items and a photo booth from Farmer’s Daughter Photography in which people took their own photos. These pop-ups were very busy from 8 a.m. to 10 a.m. and consistently patronized from 10 until closing at 3 p.m.

The Harrington Historic Preservation Commission met Saturday morning with the following present: Karen Allen (chair), Nathan Luck (co-chair), Aileen Sweet and Anita Harman (members), Shaelyn Hall (intern doing HHPC project), and the following visitors: Tim Tipton, Linda Mielke and Maddie Peters. The focus of the meeting was the project that intern Shaelyn Hall is working on for Harrington. She is a student at Evergreen State College and is interested in Harrington’s history. She will be using her skills in videography and editing to create some short films to help document and promote Harrington. The first project is the town square in Harrington. She will integrate a virtual model, interviews, and photographs to market the fundraising effort for the matching grant provided by Innovia of Spokane. Innovia will match funds up to $30,000 and the HHPC will assist in every way to meet the goal. The town square project is located in the middle of the Central Business and Historic Downtown Harrington. The video that is created will be shown at the car show where fundraising efforts will take place. For more information about the town square project and how to donate, go to the Harrington website http://www.harringtonbiz.com/2019/03/harrington-town-square/

The Harrington Opera House rummage room was open for the community from 10 a.m. to 2 p.m. with a slow flow of people. As it turned out, more items actually were donated for the May rummage fundraiser than departed, but HOHS is pleased to announce that it was able Friday to relocate eight boxes of craft items that had been donated several years ago. The recipient of these items was Taunya Sanford, via Linda Colbert, to aid in filling the budget void at the school.

An informal jam session was attempted primarily for mountain dulcimers (DAD tuning) at the Harrington Opera House in mid-afternoon, from 2:30-4:30 for anyone who felt comfortable playing dulcimer/fiddle tunes along with those playing dulcimers. The posting on the internet seemed to attract considerable interest, but alas, when it came to driving the distance and showing up on stage, only a handful turned out to meet with Karen Robertson, a student on the dulcimer.

The Rocklyn Zion Chapel “Hymn Sing” this spring was held April 28 at 3 p.m. Prelude music was played by Linda Zellmer at the organ and Cheryl Beymer at the piano. “Family of God” was recognized behind the din of visiting as the church began to fill. Shortly after 3 p.m. Judy Mielke gave the “Welcome” and introduced Nick and Shelby (Maurer) Young of Moody Aviation, who gave the opening prayer. Shelby is the daughter of Dale and Cindy Maurer and granddaughter of Melvin and Margaret Maurer. A few moments were taken for audience members to greet one another, since some had traveled quite a distance to attend. There were nearly 50 present.

In remembrance of the early pioneers and their long history of German singing and preaching, the Rocklyn Zion German Quartet sang “Immer Froehlich” (Always Cheerful). It was composed of Dillon Haas, Kim Kruger, Robert Mielke and Cody Zellmer accompanied by Cheryl Beymer and Linda Zellmer. Judy Mielke introduced the song leaders for the hymns picked, Robert Mielke and Janice Kruger. The music began and filled the little chapel. Hymns selected in the first portion of the program included: “Now Thank We All Our God,” “He Lives,” “Day by Day and With Each Passing Moment,” “Abide With Me,” “Why do I Sing About Jesus,” “Hark! the Herald Angles Sing,” “Take Thou My Hand, O Father” and “He Touched Me.” Judy Mielke played a flute solo, “Whispering Hope,” accompanied by Cheryl Beymer.

A short message was given by Nick and Shelby Young on “Becoming a Missionary Aviator.” Mission Aviation supports missionaries in hard-to-reach areas that are not accessible by road. The aviators fly in special needs, medical items, specific parts which allows the missionaries to continue their labor. “Go Make Disciples” was the great command and we are reaching the unreached people of the earth with “resurrection power.” “Jesus actually changes lives and that’s what gets us excited.”

The second session of picking hymns began with “Pass It On,” “Onward Christian Soldiers,” “Are You Washed In the Blood,” “When I Survey the Wondrous Cross,” “How Great Thou Art,” “Christ The Lord Is Risen Today,” “I Love To Tell the Story,” “It Is Well With My Soul,” “Wonderful Grace of Jesus,” “Blessed Assurance, Jesus is Mine” and “Amazing Grace.” 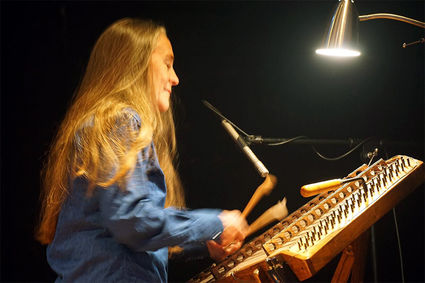