Cruizin' Harrington bigger and better than ever 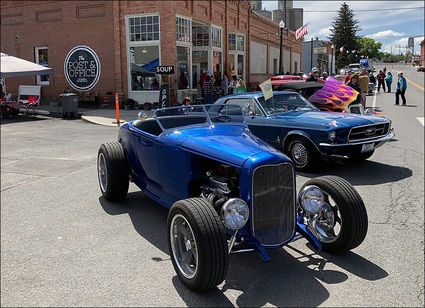 A shot of a beautiful roadster parked outside of The Post & Office during Cruzin' Harrington.

Beautiful skies and weather prevailed for the 8th Annual Cruizin' Harrington event. Main Street (not Third St) was barricaded for vendors at its junction with Third Street, and traffic flowed slowly and smoothly throughout the day. There was a sufficient breeze to unfurl the flags that lined the streets and the cemetery.

The Booster Club serving breakfast from 8 a.m. to 10 a.m. provided biscuits and gravy, eggs, fruit, coffee and juice to over 50 people and the Booster Club was very happy with the turnout.

The Harrington Golf and Country Club was busy all day, "We are happy everyone came out." They served about 60 prime rib dinners in the evening. The patrons were a mix of usual customers and a nice flow of new people taking their first round on this course.

The Harrington Library Board had a book sale on 3rd. Some serious readers purchased books to keep them busy, and there was good interest in seeing what had been weeded out of the library. Some donated for the library without removing any of the books offered.

A special display was created highlighting Bessie Robertson's creative projects. Bessie Ray was born in 1916, married Lester Robertson in 1937 and was a farmer's wife until a tragic accident took Lester's life. She moved to town from the farm with her three children. She became most proficient in a variety of skills working with threads and fabrics, creating a wide assortment of handicraft projects. Her attention to detail, drive for perfection and patience of a saint enabled her to create a variety of sewn and needlework artistry, from custom made clothing and tailoring to decorative items, from thimble-sized crochet sculptures to queen-sized quilts. In years past her many friends in the community were the recipients of gifts of her skillful needlework. Bessie Robertson passed away in 1997.

Studio 1 on south 3rd was busy throughout the day. Being on the corner of 3rd and Main Street, they were in the center of the action with all the vendors on Main Street. Having opened last September, this was the first Cruizin Harrington for Studio 1, and many people were delighted to step into the store and find some of the treasures that they offer. They had a nice day, lots of traffic and met lots of new friends. They received some special orders and were able to showcase some of the amazing artisans in our area: Watercolor Art by Ashley, Leather Jewelry by Cindy Lee and Cherishables by Cherie (high-end jewelry). This wonderful little shop has home decor and wood products that customers enjoyed while browsing.

The Rummage by donation at the Opera House was another great success. The generosity was rewarding to see; most shoppers understand the concept of purchasing merchandise previously donated for the purpose of continuing the rehabilitation of the building. Saturday was busy from 9 a.m. until well after the 3 p.m. proposed closing. Workers were still on site after 6 p.m. Visitors from California and Alaska made their traveling known to staff.

Questions were brought in regarding memorabilia seen in the lobby announcing "Jim Town." In 1917, the Harrington Opera House put on "Three Days of Jollity." As was found in news clippings, Jim Town was a typical western town in early days and they were having a "Karnival" under the auspices of the Knights of Pythias. The production was to be repeated in 1921. Another inquiry was made regarding the square grand piano which was donated to the Harrington Opera House by the Swenson family. A man played a few bars on the piano and expressed his opinions on the construction of the "square" grand pianos, stating that these pianos were built during the Civil War and that they were made with steel wires, and consequently they tend to need to be tuned very frequently.

The Post and Office, owned by Heather and Justin Slack, was busy Saturday with a steady flow of customers throughout the day. They stated that they "enjoyed seeing so many people in town and had a wonderful day serving coffee, food and chatting with folks! Cruizin' Harrington continues to grow each year and we are proud of all the hard work our community puts in to make it such a successful event!"

Jeremy from Northwest Inflatables was steadily busy from opening until 4 p.m. Two bounce houses and the water balls gave fun options for the crowds to enjoy. The 28 vendors enjoyed their day, offering a wide variety of options for the many visitors to their booths. Several reported that it was a fun and profitable event. Customers enjoyed the unusual offerings such as beard products and children's photos with a unicorn!

The Nazarene Church sponsored games for children, set up in the US Bank parking lot. They also had games available at their church site where they were providing excess fruit and produce from the Food Bank. 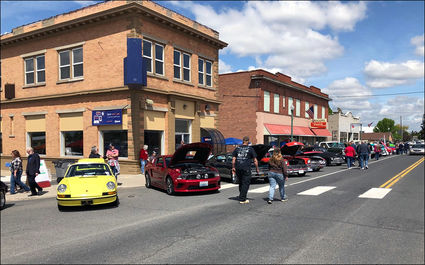 The Car Show, which continues to be wildly successful each year, attracted an estimated 100 automobiles that lined both sides of Third Street in the business district.

The Chamber of Commerce had arranged for the old Fire Truck, a 1946 Mack, to come out of retirement and stand duty to draw attention to the proposed Town Square lot. A fund raiser is being organized to sell paver blocks for the site.

Mid-County Seniors were selling Kettle Korn, baked goods and crocheted hats for donations for their organization.

The Electric Hotel with its recently refurbished lighted sign on their 3rd Street entrance had a successful day with many tours of their building from 9 a.m. to 3 p.m. Owners Jerry and Karen Allen had vendors on site and music by Rodney Aho, a pianist, and the Hawk Creek Acoustic Guitar Duo.