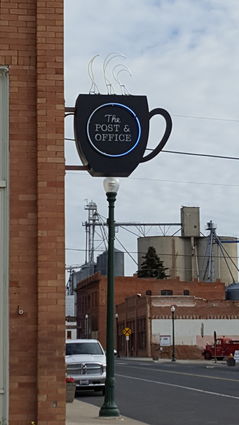 The Post & Office in Harrington has a new sign. The view is to the south from the southeastern corner of the intersection of Third and Main Streets, with the current vacant lot, the Newland Building (Floyd Bldg) and the Lincoln Hotel in the background. Stately grain elevators fill the southern sky.

As has been the practice, the Harrington Public Library is offering its summer reading program on Thursdays in July, beginning the July 11 from 3:30 to 5 p.m. The STEM program this year is "A Universe of Stories". The primary instructor for these sessions is Kris Moritz. Moritz is the mother of two and grandmother of four. Old-timers among our readers may recognize some of Kris's connections to our community. Her grandparents were pioneer homesteaders, Fred A. and Katie Kinzel. Her mother was Alice Kinzel and she is the niece of Mannie Kinzel, currently residing in Odessa.

Tuesday evening, June 18, 2019 the Harrington Public Development Authority met at city hall with President Heather Slack, Tim Tipton, Paul Charlton and Bunny Haugan present. Discussion was held regarding commercial property, since it was announced that the former Challenger Cafe had recently been purchased. There was no information on the proposed use of the building. The members suggested that a letter to the City Council encouraging their support in advocating that commercial buildings in the downtown business district be used for commercial businesses only, restricting use as residences.

It was noticed recently that some brick work is being done as part of the renovation of the former Harrington Haus Tavern. It is currently owned by Jay Gossett, as is the former Carrot Patch.

Lack of housing was discussed since people are inquiring about possible places for sale or rent, with little selection available. The next meeting is scheduled for July 16.

Harrington's business district was in essentially the same location in 1894 as it is today. Following a large fire in 1894 that destroyed the large Wilson brick building containing a saloon, Great Eastern Clothing Company and King & Reeves druggists, the owner began immediately to rebuild with opening in July of 1894. This brick structure occupies an area from Main Street to the alley next to City Hall on the west side of Third. The area currently referred to as the Challenger Cafe is the southern most section of the 1894 structure. During its earliest years the area next to the alley was a meat market and a saloon at various times. Weisgerber & Hegele, butchers, were advertising in 1903, and later Charles Hegele was identified with the Harrington Packing Company. In 1912 Uyeda and Sekiya leased the end section of the block from Chas. Hegele.

The building had consistently housed a cafe or restaurant from 1912 into modern history. By 1918 Sekiya named the restaurant the Royal Cafe, under which name it functioned for many years. Joe Kinoshita was proprietor of the Royal Cafe in the 1920s. "Royal Cafe Banquets Patrons. Fifty-three Harrington people enjoyed a big banquet at the Royal Cafe last Friday night, the affair being a free treat by the Japanese proprietors of that restaurant. All present had a big time, and ate enough to last them all winter. Among the many good things were fried chicken, French Fried potatoes, celery, cabbage salad, bread, butter, pickles, olives, oranges, nuts, candy, Jello and whipped cream, tea, pears, coffee and cake. The restaurant opened in 1908 by Harry Sekiya and he has been in charge ever since. For several years his partner has been Tommy Tagami." (Citizen: 12-28-1923) In November of 1924, Sekiya went on an extended vacation to Pasadena, Calif. and left his partner Tagami in charge. Through the years Sekiya and Tagami were sharing the work load. In 1926, Tagami left to spend time in Japan.

The little cafe came under siege by thieves in 1926: "Hold-Up Man Robs Japanese. 'Stop!' demanded a 'stick-up-man' about 10 p.m. last night to Joe Kinoshita, proprietor of the Royal Café, as he and his wife were going home down the alley back of the café. They stopped. 'Put your money on the ground,' was the next command, the robber's gun still pointing at Joe. 'All right,' replied Joe, turning as pale as a ghost. And he layed $100 on the ground. 'Now go home,' said the bandit. Joe did.

Marshal McKinnon was soon notified and the search for the thief is in progress. A 'stop payment' order was placed at the bank for about $40.00 in checks but the rest is gone." (Citizen: 2-19-1926) Joe Kinoshita became associated in the Royal Cafe in the 1920s and continued there through 1952. In fact, his son Jo-Jo was struck by an automobile in 1929 when he tried to cross the street from the Family Theatre where he had purchased some popcorn to the Royal Cafe. The owner of the car was Mr. E. O. Mudd. The accident was unavoidable according to witnesses and there were no broken bones.

In 1949, the area now known as the Carrot Patch was a pharmacy, which was totally destroyed by fire, but the Royal Cafe was barely singed and they were able to reopen immediately. The Royal Cafe continued until 1954 at which time it was purchased by Emery Heinemeyer, who changed the name to Challenger Cafe. Heinemeyer had previously operated the Inland Empire Cafe. "Store Room at Rear of Challenger Cafe Burns. A fire of undetermined origin about 6 p.m. Tuesday, damaged the interior of the Challenger Cafe store room (metal covered addition at the rear) and damaged the walk-in and upright freezers. Other parts are water damaged. Cecil Birge and Carlton Major, owners, plan to repair and do some remodeling and hope to be open the first of the week." (Citizen: 6-06-1958)

Birge and Major owned the business with Athelia Major operating the cafe. Rapid turnovers occurred with Mr. and Mrs. Roy Green of Spokane taking the lease on the Challenger Cafe in March 1959. Cora Rae and Roy Meyers owned and operated the Challenger for many years. The most recent business to be held in the building was an Internet Service by the late Jay Draper, whose estate has recently completed the sale of this section of the historic building, having survived since 1894.