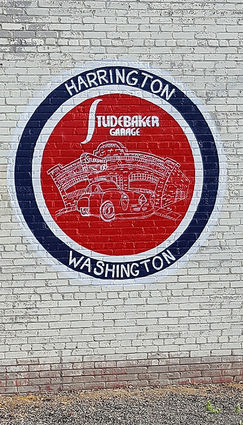 The sign on the north wall of the Harrington Studebaker Garage sports a red center with white lettering surrounded by a blue border.

The monthly meeting of the Harrington Opera House Society was opened by President Ellen Evans at 7 p.m. July 1, with Mark and Sheryl Stedman, Billie Herron, Ed and Bunny Haugan, Carol, Becky Moeller, Marge Womach and Kris Moritz present. Minutes and financial reports were presented and accepted. Moeller drew up the operating budget for 2019, which passed unanimously.

Discussion was held regarding issues with the structure and reports by the building committee. HOHS is waiting for Avista to respond with the rebate for the lobby furnace and to work out the capital investment reimbursement for the rummage room furnace. With Gordon absent, the lobby door handle report will wait until the next meeting. Carol reported on the projector/computer installation and training. She was given consent to purchase a necessary cable for the equipment. Carol reported that with the tightening of several screws, the doors at the base of the old staircase are now working properly and will lock and unlock with ease. Stedman reported that he investigated retractable folding gates for securing the old stair case at the top. Unanimous vote was given for him to measure and order the gate.

Previous events and those planned for the future were discussed. A short recap seemed very positive regarding the June 22 concert by Dr. Kevin Hekmatpanah and Dr. Chen. The next scheduled event is the Peter, Paul and Mary Tribute by the Willows in September. Contact was made by Dennis McMillan, Pages of Harmony, with interest in bringing their Barber Shop Quartet soon. This met with approval in the group. A request was made to a member that the community would like more Country music than what HOHS has been bringing in. The group seemed quite positive about expanding the type of programs presented. A few comments were made regarding a "human trafficking presentation" that Herron has been trying to get a speaker to schedule here. A member also requested that HOHS contact the Yakima Bel Canto which has performed previously and been well received. Two tours have been requested, one for July 18 and the other for Fall Festival by the Class of 1969.

Several annual reports had been presented earlier in the year, and this meeting was the conclusion of these, with Karen Robertson's report on marketing/media being read to the group. The meeting adjourned at 7:53.

Congratulations to Class of 2019

Summer announced she has a new job at the US Bank, "loan document specialist with retail credit" and will not be doing customer service anymore, but will remain in the Harrington branch.

The Chamber tourist map project to increase tourism in Lincoln County, "Country Back Roads Map," is ordering the second 2,000 copies. They are being distributed to info centers within the 509 area code and to car clubs that had been invited to Cruizin' Harrington. As will be recalled the art work and drawings were created by local artist Les LePere.

Ed and Bunny Haugan were awarded Yard of the Month for July. (This writer erred last month in the June Yard of the Month. It was awarded to the Dave Buddrius yard on Fifth Street, rather than a house on Third Street.)

Scott McGowan and Tipton are looking into finding a new kiosk (public bulletin board) for the parking lot next to city hall where current notices are posted for public display. Chamber voted to purchase brochure pockets to be added to the kiosk. This will hold eight brochures. Prices are being sought for the kiosk.

Discussion was held regarding vendors. It was suggested to limit vendors for Fall Festival to about 20 in an attempt to ensure an adequate patronage for each vendor. Chamber members did not want the number of vendors limited.

Cade Clark will meet with Mid-County Seniors in July to discuss arrangements to have seniors eat at the school with the students on the days that Senior Meals is closed, Mondays and Wednesdays.