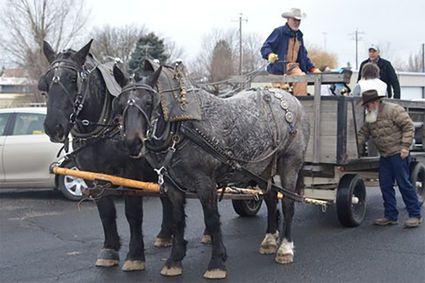 Terry Batterman and his assistant Skip Simpson, give wagon rides with Terry's Blue Belgian horses to any person who wanted to experience what it was like for the settlers coming through town.

The Harrington Opera House Society met in the Art Room on December 2 for their monthly meeting. Attending were Billie Herron, Mark and Sheryl Stedman, Becky Moeller, Karen Robertson and Ellen Evans. Minutes and financial reports were given.

Various building projects were discussed. The lobby door is being worked on. The railing for the east lobby staircase is being engineered to deal with the soft brick on that wall. The purchase of a defibrillator is being reviewed. The making of cushions for the pews is on hold for the present.

Preparations were discussed regarding Santa pictures to be taken in the lobby December 7 from 11 a.m. to 1 p.m. Very favorable comments recapped the Nov. 17 program by flutist Alicia Mielke and pianist Kevin Garnica. The community Thanksgiving service held in the auditorium was said to have been very poorly attended.

The annual meeting of the Society was to be held Jan. 6, 2020 at 7 p.m., when reports from all officers and committees are due. Robertson suggested advertising a membership drive in the newsletter to be published after the annual meeting.

The Public Development Authority will host a Community Forum on Sunday, Jan. 12, from 2 to 4 p.m. at Memorial Hall. Representatives of all local organizations are requested to attend. Potential discounts for vendors who request two spaces for Cruizin' Harrington or the Fall Festival were discussed. Slack suggested adding Christmas lights to the light poles on 3rd Street, a matter needing approval by the city council before further action can be taken. Jay Gossett is creating "The Marketplace" inside the former Carrot Patch business, historically known as the Harrington Pharmacy. His plan is to create multiple custom-sized booths for vendors to rent by the day, weekend or month. Chamber is organizing a street dance to take place the night before Cruizin' Harrington. A new committee was formed, consisting of Paula Harrington and Cade Clarke, to develop "welcome baskets" for new homeowners and new businesses. They will present their ideas at the next Chamber meeting for funding and approval. Haugan suggested making baskets ahead of time and saving them so that they are ready whenever new people move into town. A limit will be set for how many are pre-made in order to avoid expiration dates expiring.

The deadline for paying Chamber dues is Jan. 31, 2020. The next Chamber meeting will be Jan. 8, since the first Wednesday is New Year's Day.

With a gentle mist falling early in the morning, the schedule for the December 7 Hometown Christmas Celebration moved forward and by the 9 a.m. opening of the Harrington Opera House Rummage sale the mist had stopped and the sky began to brighten. The staff was barely in place when the eager early-birds were examining the wares laid out for the public.

A steady flow of shoppers continued throughout the day. Some concern was shown that a semi-truck was parked and running on 3rd Street in front of the main entrance of the Opera House. The fumes were entering the lobby and the driver was sought. Suddenly the truck lurched out onto 3rd Street and up the road and across the tracks. People began reporting that the truck took down a light in front of the City Hall and that the driver just kept on going, in spite of the noise that it created. This flurry of activity was soon replaced by the 11 a.m. arrival of Santa on the fire truck with sirens blaring. A large number of children were on site and squealed with delight and excitement as he came into view. Mrs. Claus was also present. There were 42 sittings for Santa pictures; the process was smooth and very pleasant.

One of the blessings that was bestowed on our Harrington Hometown Christmas was the giving spirit of Terry Battermann, who lives 13 miles west of Davenport, and his assistant, Skip Simpson, who lives south of Harrington. With Simpson assisting, Battermann presented his two roan Blue Belgian horses in their beautiful leather tack drawing a wagon. The horses, aged 24 years and four years, gave rides to one and all who wanted to experience how the early settlers felt as they came through town on their wagons. This was a wonderful addition to the activities and was enjoyed by a host of "travelers." Many of the parents seemed to enjoy the ride as much as, if not more than, their youngsters.

Activities at the Memorial Hall began at 11 a.m. with the Holiday Bazaar with its assortment of vendors. Homemade soup with rolls was offered by the Harrington Music Program. Customers stated that the aroma was enticing. Set up around the hall were 14 vendors with a wide assortment of merchandise. Healing oils, custom children's superhero pillow cases and barnyard animal socks were some unique gift options. There was a steady flow of people most of the day, with good sales reported by several of the vendors. LaMarr Larmer, on behalf of the Harrington Golf and Country Club, was offering tickets for rounds of golf and for golfing amenities. Carolyn Mattozzi sold pastries, cookies and scones. Celeste Miller offered Jamberry's, Inc. products for fingernails. Cherie MacClellan offered a large selection of high-end jewelry. One of the school organizations sold T-shirts, hats and athletic jackets. 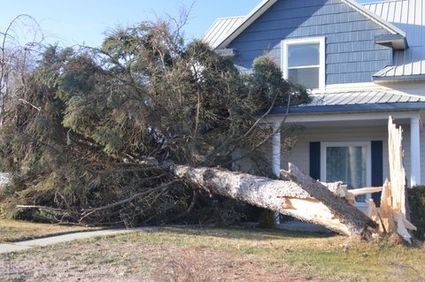 November winds took down this beautiful tree on Fourth St. in Harrington, across from the Odessa Union wearehouse elevator. Damage to the house was not enough to interfere with Thanksgiving dinner.

Local professional pianist Rebecca Hardy gave a free Christmas concert as a part of the afternoon's entertainment. She played many beautiful Christmas songs and also provided experience to some of her piano students by enlisting them to play a few pieces as well. Students on the keyboard included Shawna Williams, Colden Wagner and Sadie Steward. Four darling five-year-old dancers presented some of their dance moves for the attendees.

At 5 p.m., a light drizzle began to dampen spirits a bit. However, Robert Viershilling had the Harrington Elementary students sing "Jingle Bells," "Silent Night" and "We Wish You a Merry Christmas," with everyone invited to sing along. Sheets with the lyrics were handed out. Vierschilling stated he "taught the songs to all elementary school students in K-4 over the week, and some students came with their parents to the tree lighting, which was not an official school event." It was estimated that about 40 people were there including 15 students.